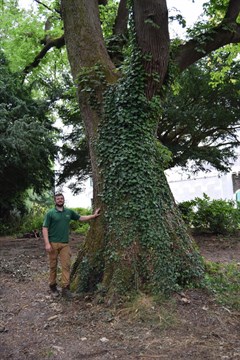 The public are being asked to remain vigilant in spotting signs of Dutch elm disease in the Island’s elm tree population, with an appeal from the Department of Environment, Food and Agriculture to ‘See It, Snap It, Send It’.

The disease is caused by a fungus which is spread from infected trees to healthy trees by elm bark beetles. This year’s warm weather has created perfect conditions for the beetles to move between trees and spread the disease.

'The public have a vital role to play in helping to prevent the spread of Dutch elm disease in the Isle of Man.

'By identifying cases as soon as possible, prompt action can be taken to either remove diseased parts or the whole of an infected tree to prevent the disease spreading.

'Such was the scale of the devastation in the elm population in the UK and further afield, many authorities are simply resigned to the fact that the disease is rampant. The Isle of Man is therefore relatively unique in its proactive focus on prevention of the disease.  This has involved a vigorous programme of felling and burning over the past quarter of a century.

'Our efforts have been very effective with only around 1% of the Island’s elm trees affected. It means we have a relatively large and healthy population of elm trees, enhancing the Island’s biodiversity and our status as a UNESCO biosphere reserve.

'Everyone is our community has a role to play in helping prevent the spread of this devastating disease. If you spot a tree that seems unhealthy please ‘See It, Snap It, Send It’ to DEFA.'

All that’s needed is a photo of the tree and a description of its location or grid reference.  This can be sent via email to dutchelmdisease.defa@gov.im, text message or WhatsApp on 07624490713, or reported on Facebook at www.facebook.com/DefaHillsForestsGlens.

Symptoms develop rapidly, leading to the death of infected trees.

The latest appeal comes following work to save a large veteran elm tree at Milntown in Ramsey which, at around 300 years old, is thought to be the largest and oldest elm on the Island.

Thanks to prompt reporting by the Milntown estate staff, only diseased parts of the tree have been removed and it is hoped the pruning will prevent the disease spreading to other parts of the tree, allowing it to be retained.

Four other large mature trees were identified as diseased, three of which have been removed. Two further trees are showing symptoms of the disease are still to be tested.

As well as the visual benefit that these mature trees deliver, they also play an important role in biodiversity, providing a valuable habitat for lichen, fungi, insects and bats.