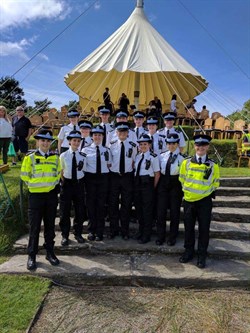 The latest graduates from the Police Youth Scheme took part in a passing out ceremony at the Best Western Palace Hotel in Douglas last week.

A total of 13 youngsters aged 17 and 18 successfully completed the four-year scheme which aims to provide an insight into policing and access to a range of experiences at the same time as helping the community.

Meetings are held one evening each week at Police Headquarters and involve training in various aspects of police work, with sessions covering police radios, custody procedure, the law, scenes of crime procedure and police dogs, as well as joining patrols.

During their time with the Isle of Man Constabulary, the youngsters have also:

During a speech at the ceremony, which was attended by the cadets’ families, Chief Constable Gary Roberts said:

‘The process the cadets have gone through has been transformative and I’m proud the Isle of Man Constabulary is able to cater for the Island’s young people in this way.

‘What they’ve done is change – they’ve gone from being teenagers, with all that entails, to fine young people.’

Addressing the cadets, he added:

‘Whatever you do, and wherever you go, remember your time here with us. Some of you may end up joining the police. You may even end up doing my job. But this hasn’t been about that.’

Last week’s celebration marked the end of an important process for the youngsters involved.

‘I can honestly say that the skills we have developed have been life-changing and have transformed us into more responsible and capable young adults. The friendships we have made with each other and other members of the constabulary and the public, especially with the leaders, are invaluable.’

‘At the beginning of the scheme, we were all nervous about almost every interaction we had with members of the public, other officers and each other, and we were mostly oblivious to the hard work that the constabulary does to keep our Island safe. But after two years of being exposed to the world of policing and being put in many situations that challenged us physically and emotionally, we are much more confident and competent members of society.’

Established in 2014, the Police Youth Scheme is run by Constables Mike Griffiths and Paddy Moore for those in school years 10 to 13. Financial assistance is provided by Ellan Vannin Fuels.

Recruitment takes place every two years with the latest campaign for applications now open and running until Friday 1 June.

During the selection process, candidates are assessed against the Isle of Man Constabulary’s organisational values, in line with normal police procedure.

Three of the first intake to the scheme are now full-time police officers and another two are Special Constables.

To apply to join the Police Youth Scheme, call Jane McCann at Police Headquarters on +44 1624 631547 or complete an application form which can be found on the Isle of Man Constabulary website, iompolice.im – search Volunteer Police Youth Scheme.