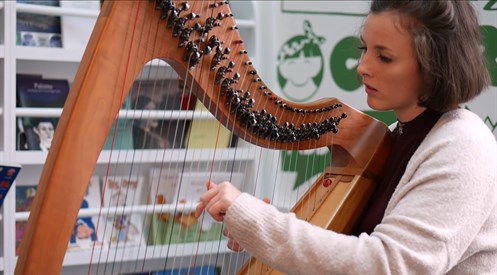 The Isle of Man’s outstanding musical talent has been praised by Graham Cregeen MHK, Minister for Education, Sport and Culture, following success at the 2018 BBC Radio 2 Folk Awards.

Mera was successful as one of the ten acts invited to the Young Folk Award Weekend in January which culminated in a public concert in Kendal, Cumbria.  From the ten performances, a panel of judges selected four finalists for the Young Folk Award, with Mera announced last night as the winner.

Mera, who is 18 and a sixth form student at Ramsey Grammar School, has been playing harp, violin and whistle since she was eight years old.  She has benefited from harp lessons from visiting tutor Rachel Hair which are organised by Culture Vannin, and she is a member of the Bree youth folk group, Scran, who are about to release their debut album.

'I'm so happy to have won the BBC Radio 2 Young Folk Award! It was exciting enough for me to just be there surrounded by so many folk legends. It was a really great opportunity and I had an amazing time.

'Thanks for all the support from everyone back home – it’s been so lovely!  Thanks to Culture Vannin for all their support, and special thanks to Rachel Hair and Mike Boulton as I wouldn’t have even been there without all their incredible help over the years.'

As part of her prize, Mera will have the opportunity to perform at several of the UK’s major folk festivals.

Each member of a 150 strong voting panel nominated four finalists for the award before voting for the winner.

Another Manx connection was through Jamie Smith, a professional musician who lives in the Isle of Man, as his Welsh group Alaw made it into the finals of the awards for best traditional track.

'There is a real sense of pride today following the success of Manx artists at this year’s Folk Awards. I would like to extend my congratulations to all of the Manx-born or based finalists and winners.

'It is not just about natural talent, it takes hard work, dedication and the support of tutors and families to compete at this level. Making it to the finals alone is a magnificent achievement, so it is very special indeed to see artists from the Isle of Man winning awards.'

'The Isle of Man has a rich culture and proud heritage which is perfectly expressed through the outstanding musical talent found on our Island.'

The awards ceremony, this year held in Belfast, is a highlight of the folk music calendar and was broadcast live on BBC Radio 2. Highlights can be seen on BBC Four this Sunday at 9pm and the full awards ceremony is available to listen to again online.