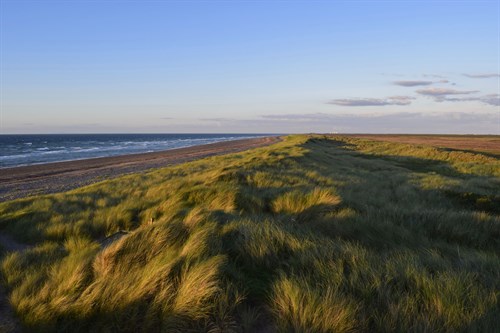 Dog walkers are reminded their animals must be on leads at the Ayres National Nature Reserve from Sunday 1 April – Tuesday 31 July to protect ground nesting birds.

The requirement comes under special bylaws for the reserve and failure to comply could result in a fine of up to £2,500.

The reserve is an important refuge for ground nesting birds, some of which have seen a decline in numbers in the Isle of Man.

Curlew, lapwing, oystercatcher, ringed plover, little and Arctic tern, skylark and meadow pipit all lay eggs on the ground at the reserve.

When chicks hatch, they move away from nests under the watchful eye of their parents. It can be five weeks before they can fly, during which time they are vulnerable.

Visitors to the reserve are therefore asked to keep to the main paths and move away if birds show signs of agitation or distress.

'The Ayres and its birdlife are very important to the balance and diversity of wildlife in the Isle of Man. It has a unique environment which is not found anywhere else on the Island and attracts birds that are both rare and declining in numbers.

'We want everyone to make the most of our beautiful Island – such as the ongoing 2018 Year of Our Island celebration – but this enjoyment comes with responsibilities.

'We must all be custodians of our unique biosphere which has been recognised by UNESCO.

'We appeal to dog owners to act responsibly and we will be working with the Isle of Man Constabulary to ensure anyone who flouts the bylaws is penalised.'

'There is clear signage at all entry points onto the Ayres National Nature Reserve showing that from the 1 April until the 31 July each year, dogs must be on leads.

'We would ask that dog walkers respect this law, which only last for four months each year. Owners who want to let their dogs off of the lead should go elsewhere. Anyone found exercising their dog without a lead may find themselves in court and facing a substantial fine.'