UCM’s History & Heritage lecture series continues next Wednesday with a talk by Dr Peter Davey about the history of Rushen Abbey and, in particular, the abbey church.

Rushen Abbey is one of the most important medieval religious sites on the Isle of Man. The abbey was founded in 1134, when Olaf I, King of Man and the Isles, gifted land on the Island to the Abbot of Furness Abbey in Cumbria.

The abbey was hugely influential on the Island, not least due to its significant landholdings. At the time of its dissolution, it held lands as far north as Sulby, and as far south as Colby.  The Chronicles of the Kings of Man and the Isles was probably written by the monks at Rushen Abbey during the 13th and early 14th centuries.

In 1540, the abbey was dissolved, as part of Henry VIII’s campaign to disband religious houses in England and Wales. The abbey buildings fell into disrepair, and only a few remain standing today.

The Church of St Mary the Virgin was the oldest and most important part of the abbey. It was built to a cruiciform (cross-shaped) plan using both local and imported stone. The church tower, which still stands, was a later addition, and was probably constructed in the 14th century.

Basil Megaw, former Director of the Manx Museum, argued that the original location of Rushen Abbey was the current site of Castle Rushen, and that the abbey moved, first to Douglas, and then to its present site in Ballasalla. The argument was compelling, and this interpretation has generally been accepted. However, in his lecture on ‘The Monastic Church of St Mary of Rushen: Archaeology, Architecture and Function’, Dr Davey will set out to refute this argument, using the evidence obtained from eleven seasons of excavations at the abbey, between 1998 and 2008.

The lecture will examine the context in which the abbey was founded, the size and plan of the church, the dating of its various elements, and its architectural features. These will be discussed against the backdrop of the changing architecture of Cistercian abbeys elsewhere in the British Isles, and particularly with Grey Abbey in County Down. Dr Davey will argue that the Church of St Mary of Rushen was built before 1170, when changes to the form of Cistercian abbeys were introduced.

The lectures are free to attend, and no booking is required. Further details about this year’s History & Heritage lecture series, together with videos of previous lectures, can be found online at catrionamackie.net/lectures/. 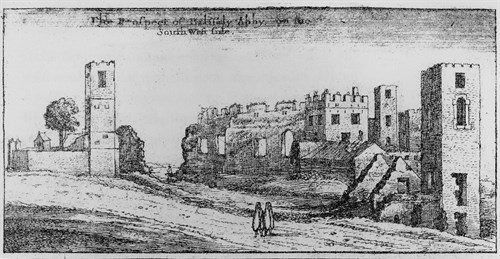 View of Rushen Abbey from the north-west, c. 1650, by W. Hollar (taken from Manx Society Vol. X, from an original held at the British Library)