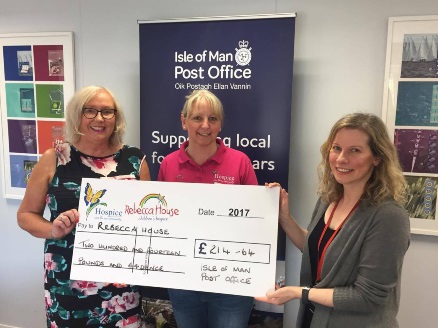 On Friday 26 May, staff from Isle of Man Post Office held a fundraiser day to help celebrate 10 years of Rebecca House. A fantastic £214.64p was raised!

The Post Office took part in the day by holding a dress down and also a bake sale around the business, where staff brought in a range of delectable items, cakes and biscuits, ready for the day, which were then sold to raise monies for the charity.

Rebecca House is a children’s wing in the Hospice, Isle of Man. The purpose-built facility was opened in November 2007 and provides respite, palliative and end of life care for children with life-limiting or life-threatening conditions from birth to 18 years. It offers a safe haven and a home from home environment in which physical, emotional, recreational and spiritual care is offered and implemented in a way appropriate to the child and their family.

'We launched our Rebecca House 10 year campaign in February 2017 and are very grateful for the support of the community in getting behind raising awareness of our children’s hospice but also raising funds.'

'I would like to express our gratitude to Isle of Man Post Office for their continual support of our charity.'

'The Post Office is always ready to take part in fundraising initiatives and we had no hesitation in supporting Rebecca House in marking 10 years of its purpose-built wing of Hospice Isle of Man and plans to raise £100,000 in 10 months.'

'Rebecca House is a fantastic charity that touches the lives of so many families around the Island, so we hope our efforts go somewhere to assisting them in achieving their target.'

Isle of Man Post Office Sponsorship Committee aims to support a variety of local initiatives throughout the year and is always keen to hear from individuals and organisations looking for support which it may be able to help with.

Visit http://www.hospice.org.im/rebecca-house-is-marking-10-years-of-care/ to find out more about the Rebecca House 10 year anniversary.