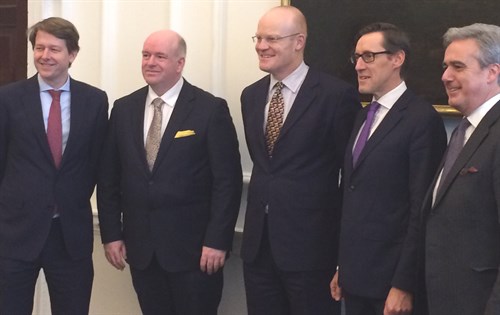 The Isle of Man is continuing to draw on the strength of its external relationships to raise awareness of its position following the United Kingdom’s decision to withdraw from the European Union.

The Chief Minister was in Westminster today, Wednesday 25 January 2017, for the second in a series of quarterly meetings between the Crown Dependencies and the UK Department for Exiting the European Union (DExEU).

The meeting in London continued the programme of engagement to promote a deeper understanding of the Isle of Man’s position as Brexit negotiations gather pace. It also provided an opportunity for the Chief Ministers to receive an update on the UK’s response to Tuesday’s Supreme Court ruling on the triggering of Article 50.

The need to ensure the Island’s voice is heard in the international arena has never been more important. Dramatic changes in the UK, Europe and America over the past 12 months have reshaped the world’s political and economic landscape.

In addition to Brexit negotiations, the role played by international business centres remains in sharp focus, with issues around tax, transparency and financial regulation still high on the agenda.

While external scrutiny presents a significant challenge, it also provides an opportunity for cooperative and enterprising countries such as the Isle of Man to reinforce their value to the global community.

The Isle of Man, supported by the External Relations Division of the Cabinet Office, is taking an increasingly proactive approach to explain our position on key issues and to emphasise the differences that set us apart from other offshore nations.

Positive engagement with countries around the world remains a priority for the Chief Minister who says he will be working to strengthen the Island’s political and business alliances in the time ahead.

Since his appointment as Chief Minister in October, Mr Quayle has held discussions in Brussels, led a delegation attending the 28th British-Irish Council Summit in Cardiff and visited Westminster on a number of occasions, including an appearance before the House of Lords EU Select Committee.

‘One of the most important roles for a Chief Minister is to serve as an international ambassador on behalf of the Isle of Man. Building a network of influential people who are prepared to stand shoulder to shoulder with the Island is absolutely essential.

‘The UK’s decision to exit the European Union is set to dominate the political agenda for many years and I will need to devote a large proportion of my time and energy towards achieving the best possible outcome for the Isle of Man. The meeting with Robin Walker and Mark Garnier enabled the Crown Dependencies to continue discussions with those at the very heart of the Brexit process.’

‘The best way to ensure our voice is heard is to get out there and meet people face-to-face. We must continue to build new partnerships and encourage people to work with us to enhance the Island’s standing in the UK, Europe and further afield. While a lot of this work takes place behind the scenes, the value to our people and our economy of maintaining a strong off-Island presence is without question.’