An award-winning programme that forges links between schools, families and the community to benefit children is expanding in the Isle of Man.

Families and Schools Together (FAST) was developed by Middlesex University in partnership with the charity Save the Children and runs throughout the world.

It brings parents, children, teachers and the wider community together to ensure children get the support they need to fulfil their potential, in and out of school.

It was successfully piloted in the Island by Willaston Primary School in 2015 and two more schools, Ballasalla Primary and Scoill-yn-Jubilee, joined last year.

It is planned to expand the programme further with the assistance of the Manx Lottery Trust and the Youth Trust.

The Department of Education and Children’s (DEC’s) Youth Service has supported two of the partners from the first programme to become accredited trainers.

This week, they and Middlesex University trained the newest participants, who will now launch the programme in their own schools.

‘Delivering support to people where needed is one of the guiding principles of the Programme for Government.

‘A child’s success at school is influenced by the support and stimulation provided at home. It’s also influenced by the relationship parents have with their school. FAST brings families, schools and the wider community together to help children fulfil their potential.

‘FAST demonstrates how powerful it is when parents work with schools, whether it be simply understanding more about what their child is doing at school, being confident to help with homework or comparing notes with other parents over issues.’

Ken explained how the programme works.

‘Schools and their partners team up to learn how to deliver the programme. They recruit families and deliver 2.5 hour sessions, tagged onto the end of the school day, for eight weeks. There is a graduation ceremony at the end. Families then take over and develop their own ideas and activities.

‘Forty-two families took part in FAST last year. They describe how it has helped them not just as parents but also made them feel more confident in their relationships with schools and forge friendships with other parents.’

‘The cost of FAST lies mainly in the initial training. Once a team for each school is trained it delivers the programme independently, with refresher training in the fourth year.

‘The Manx Lottery Trust is providing funds to allow the programme to expand over the next two years, with more of our schools involved.’ 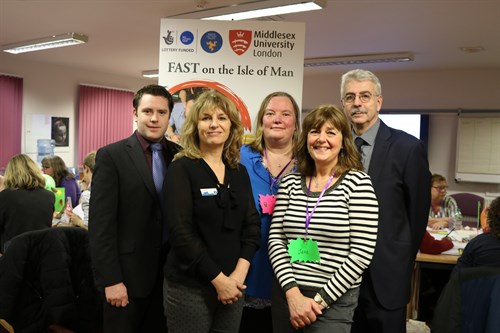