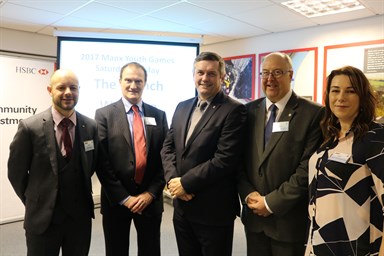 The event, run by Manx Sport and Recreation (MSR), takes place at the National Sports Centre (NSC) and other venues on Saturday 6 May.

Pupils from primary and secondary schools take part in 13 sports, representing their regions.

The Minister said: ‘The Games have introduced thousands of children to sport and, through this positive experience, many have joined community clubs, which is hopefully a stepping stone to lifelong involvement in sport.

‘Enabling people to live healthier lives is a guiding principle of our new Programme for Government.

‘Encouraging children to be active and take up sport is also important to their self-esteem, confidence and wellbeing.’

At tonight’s launch, held at the Sport Institute at the NSC, the Minister welcomed Kevin Cartledge, Senior Manager of HSBC Isle of Man.

‘HSBC have supported the Games since their inception and we are indebted to them for their involvement in growing it to the event it is today – a real highlight of the sporting and school years.’

‘HSBC is delighted to continue its involvement with this fantastic event. The commitment and dedication of all the children, sports co-ordinators, coaches and volunteers who are involved in making this such a worthwhile initiative is outstanding. It is a privilege for HSBC to support the Manx Youth Games and help grow community sport on the Island.’

Staff from Manx Sport and Recreation will visit schools this month to show a video of last year’s event and distribute information about how to get involved.

Regional training sessions, run by qualified coaches, start at the end of the month and run until May.

The Games opens with a spectacular ceremony at the NSC at 10am before participants, aged six to 15, disperse to different venues.