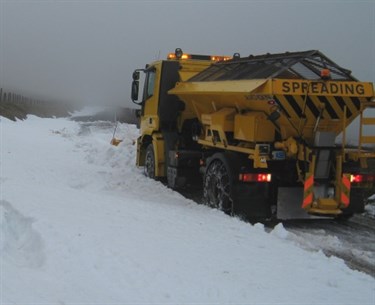 With wintry conditions forecast for the next few days, the Department of Infrastructure will be coordinating efforts to keep the Island moving.

The Met Office has issued a yellow warning to advise of cold and windy weather on Wednesday, Thursday and Friday, with a likelihood of hail, snow and temperatures close to zero.

In response to the predicted cold snap, the Department is preparing to deploy its bulk gritters to help maintain safe driving conditions on primary routes.

Priority is given to roads that carry the heaviest traffic, as well as key bus routes and roads to hospitals, fire stations and schools.

The Department also focuses on known trouble spots and current priorities. For example, Archallagan, the Sloc, Round Table, Dalby and Gleneedle have been treated this winter because of the additional traffic using these routes as a result of the road closure in Higher Foxdale.

Details of winter gritting routes are highlighted on the Government website at www.gov.im/gritting

Officers from the Highway Services Division liaise with the Met Office when adverse weather is forecast. Warnings of sub-zero conditions, ice and frost act as a trigger for discussions about which locations to grit.

A range of factors are taken into consideration, including the predicted temperature, wind speeds, the likelihood of rain, sleet or snow and the current condition of the highway network.

Subject to the nature and timings of the weather warnings, roads are treated after the evening rush hour or from 05:00am before the morning commute. Grit is spread before ice and frost forms to try to prevent roads becoming treacherous.

The Department’s emergency control room at Ellerslie is staffed round the clock during severe weather events to coordinate resources and respond to changing conditions and demands.

People are encouraged to take responsibility for driveways and footpaths outside their own properties. Grit is free to collect from the Island’s civic amenity sites and from 850 salt bins, which are placed in residential areas, outside schools and nursing homes and at strategic locations such as junctions and steep inclines to assist community safety and to help keep traffic moving. The grit is for public rather than commercial use and people are asked to take only what they need.

‘The winter months can bring extremely challenging driving conditions, particularly when temperatures drop below freezing. The Department’s gritting crews are deployed at night or during the early hours of the morning during bad weather to pre-treat roads around the Island. This is an important part of our work to keep people safe and to reduce the number of accidents.’

‘The Department prioritises strategic routes to assist the largest number of people first, as it is not possible to treat the entire network. Motorists should always take care and drive according to the conditions, as even treated roads may not be entirely free from ice. In difficult conditions people are advised to use the main routes where possible, slow down and allow extra time for their journey.’