ON THE OCCASION OF PROFESSOR STEPHEN HAWKING’S 75TH BIRTHDAY

The Stephen Hawking Association together with The Isle of Man Post Office are proud to release a special limited edition hard back edition of: 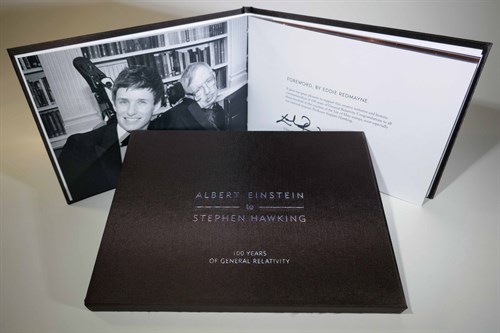 The book has a foreword from and is personally signed by the Oscar winning actor Eddie Redmayne, who played the Professor in the film The Theory of Everything.

The issue of just 100 books is individually numbered from 1 to 100. #1 is to be presented to Professor Hawking on his birthday, 8 January. The remaining books will be sold by the Isle of Man Post Office, with proceeds donated to The Stephen Hawking Foundation.

The hardback edition in slip case is a special edition of the book that was released with the stamps featuring Professors Hawking and Einstein and the major scientific works of Professor Hawking’s career.

Each book contains two full sets of the stamps, which are legal issue Isle of Man Stamps, bearing the head of Her Majesty the Queen. The successful issue was launched in 2016 to mark 100 years of the theory of General Relativity, but specifically the life work of Professor Hawking.

The Stephen Hawking Foundation exists to promote the study of Cosmology and Astrophysics, research into Motor Neuron Disease (MND) and to facilitate those working in this area and their care.

'Isle of Man Post Office is pleased to present this stunning book on the occasion of Professor Hawking’s 75th birthday and we’d like to thank Oscar winning actor Eddie Redmayne, who played the Professor in the film The Theory of Everything, for his support and contribution to the book.'