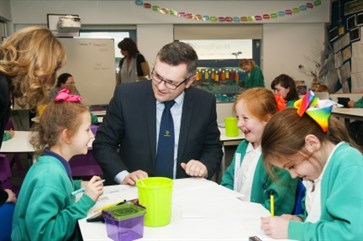 'An investment in the Island's economic success.'

Declaring the school open, the Minister said the Programme for Government promotes lifelong learning, to meet the Island's economic and social needs.

'If we want our children to continue to be high achievers, and to contribute to our ever diversifying and growing economy, we need to give them the best possible start in life and nurture their interest in learning at primary school,'

'This is a school to be proud of, boasting well thought-out facilities for the modern learner.

'It is a far cry from the elderly and cramped conditions in the old Ballacloan and Fairfield buildings, which the school has moved from.

'It is heartening to see the Isle of Man Government investing in our young people and in the Island's ongoing economic success.'

'These days, employers look for more than academic achievement when assessing candidates for roles.

'They seek adaptability, flexibility and resourcefulness – all aspects that have been incorporated into the design and layout of this building.'

The Minister said it was particularly impressive how an old Noble's Hospital ward block building had been seamlessly incorporated into the development.

He praised Tooms and its subcontractors for battling the rain and wind of last winter to have the school ready on time and neighbours of the school for their patience while it was constructed.

He said it was fitting the building had welcomed its first pupils on the bicentenary of the birth of the man whose name it carries, benefactor Henry Bloom Noble, who had left a huge legacy to the Island.