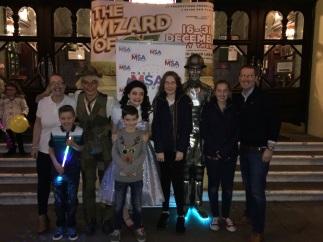 Isle of Man Post Office held an event at the Villa Arcade in Douglas on Saturday 17 December where it sponsored a matinee performance at the Gaiety Theatre for The Wizard of Oz panto and collected a generous amount of money for the Manx MSA Trust.

The event which was well attended by Isle of Man Post Office clients was a success and raised £295.93p for the charity.

Multiple System Atrophy is a rare disease with fewer than 3,000 people in the UK living with it. It is a progressive neurological disorder that affects adult men and women. The Manx MSA Trust is the Isle of Man's first support and information service for people with the disease, their families and carers, and it hopes to raise funds for research to find the cause, and one day, cure for MSA.

'The Isle of Man Post Office is pleased to do its bit in supporting the local charity and all the important work it undertakes to help raise funds to continue its vital research.'

'I’d like to thank Isle of Man Post Office and the cast of The Wizard of Oz for promoting the charity and collecting donations after Saturday’s amazing show, raising £295.93p.'

The Isle of Man Post Office’s Sponsorship Committee aims to support a variety of local initiatives throughout the year and is always keen to hear from individuals and organisations looking for support which it may be able to help with.

Find out more about the Manx MSA Trust by visiting http://www.manxmsa.com/