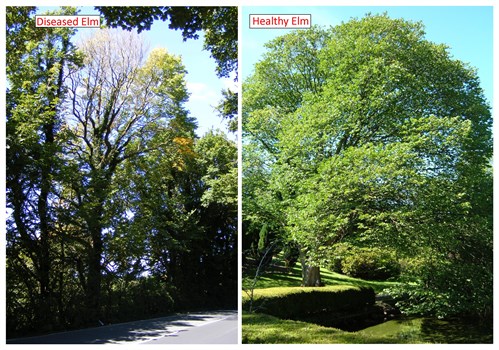 That is the call from the Department of Environment, Food and Agriculture (DEFA) as it asks the public to help prevent the spread of deadly Dutch elm disease.

In a poster and leaflet campaign, the Department is calling on those out and about to take photos and note locations of trees they fear have the disease.

Photos can be emailed to DutchElmDisease.DEFA@gov.im, sent by text or WhatsApp to 07624 490713 or shared via the facebook page DEFA – Hills Forests and Glens.

Symptoms develop rapidly, leading to the death of trees.

The decimation of the elm population, especially in England, Wales and Northern Ireland, altered the landscape forever.

The Isle of Man remained disease-free until 1992 but local vigilance and control measures mean that only 1% of the Island’s elms have succumbed to the disease since it arrived.

‘The Isle of Man has arguably the most important native elm population in the British Isles and possibly Europe.

‘Elms make up around a quarter of the Island’s tree population. As with the UK, the loss of a large number of trees would alter the countryside forever and create significant risk and cost to landowners.

‘While DEFA can be proud that it has kept the disease under control, it requires constant vigilance. Every year we need to find as many diseased trees as possible.

‘We hope the public will report anything suspicious while using our beautiful countryside and ensure we can take swift action to avoid the disease spreading.

‘As so many people have mobile devices with them, the message is simple: See it, snap it, send it together with a six-figure grid reference and location and we’ll investigate,’

The disease has meant few elms have been planted in the Island in recent years.

In conjunction with nine local authorities, eleven more trees will be planted in prominent locations around the Island.

‘Elms contribute to the character of the Manx landscape and its biodiversity value, supporting various species of lichen, fungi and insects,’

‘By planting disease-resistant trees in prominent locations, we hope to remind people of the unique status of the elm on our Island and encourage people to get involved in helping us fight Dutch elm disease.’