The winner of a scholarship to study in America says she hopes to gain a broader understanding of how different countries tackle global issues.

Brontë Wright, of Port St Mary, will study at the University of Idaho from August 2018 after being awarded the Ella Olesen Scholarship by the Department of Education, Sport and Culture.

The scholarship is named after a registrar of the university who died in 1985. Ella’s Manx ancestry – her mother Margaret Teare was born in Ballaugh and emigrated to America in 1890 – led her to gift the scholarship in 1971.

It is awarded annually to a female degree student who has been supported through her studies by the Department of Education, Sport and Culture.

The 21 year old former Castle Rushen High School student is studying for a BA honours in history at the University of Durham.

Alongside her main subject, she has studied Russian and Arabic at university, has helped transform disused offices into an art space where students and residents collaborate, belongs to the Folk and Caledonian Society and has been a member of the sailing team. 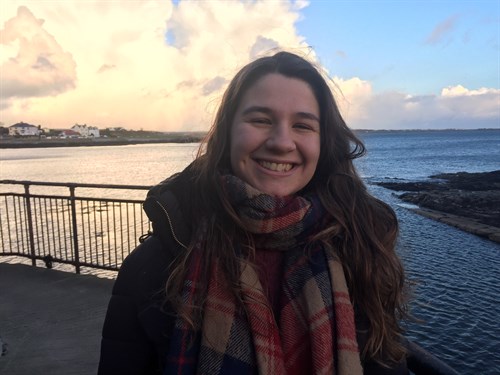 This year, she volunteered with a human rights charity in Ghana, later mounting an exhibition of her art, inspired by the country. She has also worked at a refugee camp in Greece.

Brontë is a past winner of the Barclays Student of the Year Award and has received a North American Manx Award.

In Idaho, she hopes to study international relations, which she plans to pursue as a career, as well as immersing herself in learning a language and continuing her art.

‘The scholarship is a superb opportunity for a local graduate to live and work in another country and experience its life and culture while continuing to study.

‘Generations of Isle of Man students have benefited from this unique opportunity, flying the Manx flag while expanding their knowledge.

‘I wish Brontë well as our latest Ella Olesen scholar.’

‘I am delighted to have been awarded this scholarship. It will give me an opportunity that would have otherwise been impossible. I am sure it will prove to be an invaluable stepping stone towards a career in international development. I hope to give as much as I will gain from the experience by being a good ambassador for the Isle of Man.’