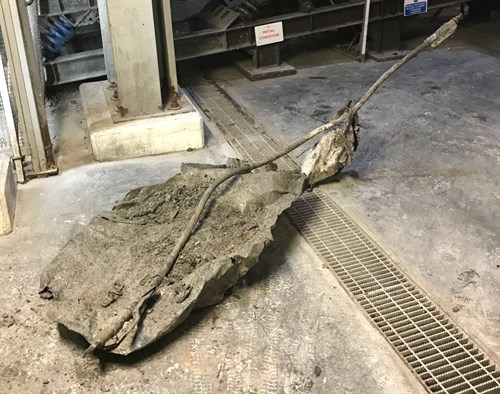 Companies that attempt to dump oversized or hazardous items at the Energy from Waste Plant will face financial penalties from 1 January 2018.

The Department of Infrastructure has announced that it will seek to recover the cost of handling non-conforming waste following a number of blockages at the facility on Richmond Hill.

In the most recent incident, the EfW plant had to be taken offline while part of a skip or metal container was removed. Clearing problems can take up to 48 hours and cost thousands of pounds as the system must be cooled before engineers can safely access and decontaminate the blocked section.

Additional spot-checks were implemented earlier this year after the facility had to be shut down on three separate occasions in the space of seven days because of blockages.

Problems arise when non-conforming items are among loads delivered to the EfW plant, mainly in skips. This can include bulky tree trunks and stumps, scaffolding poles, metal settee and bed frames, plasterboard and asbestos.

Efforts to educate users and promote voluntary self-auditing by companies, local authorities and the operators of civic amenity sites have failed to address the issue. As a result, the Department has decided to recover the costs of managing any non-conforming items identified during inspections. It is hoped this action will encourage users to sort and manage their waste more responsibly.

After 1 January 2018, companies will be charged a handling fee (£70 or £105 – see table) to remove the non-conforming waste and reload it onto their vehicles. Records will be maintained and repeated incidents will result in double or triple the initial fee being imposed. Letters will be issued to users of the EfW plant to advise them of the charges.

‘To date, the Department has relied on users sorting through their waste to remove items that could potentially cause a blockage at the Energy from Waste Plant. However, it is clear that self-regulation is not working. Given the cost, inconvenience and hazard of dealing with frequent blockages, we will seek to recover the costs from 1 January 2018.’

The Department is working with the operators of the EfW plant to draw up a User Access Agreement which, along with a revised EfW site induction process, will be launched early in 2018.