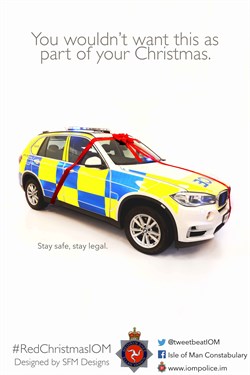 The Isle of Man Constabulary’s Roads Policing Unit will be targeting drivers who get behind the wheel after drinking this festive season.

Officers will greet those found over the limit with an unwanted present they won’t be able to return. It’s on offer throughout the festive season and into the New Year.

Images of the gift no one wants, such as handcuffs, a breathalyser kit or a cell door, wrapped in a red ribbon, will appear on the Constabulary’s Facebook pages at regular intervals to reinforce the message.

Officers will be deployed across the Island during the campaign period; the RPU will be supported by Neighbourhood Policing Teams and the Special Constabulary.

The Isle of Man Constabulary Operation Red Christmas supports the #DrinkSafeIOM campaign led by Public Health to highlight the many risks excessive drinking presents – to individuals, their families and the wider community.

‘We want everyone to enjoy and keep safe this festive season. Drink driving shatters lives, we urge people to be responsible and to plan their journeys ahead.

Alongside Public Health, we have worked closely with Bus Vannin to provide timetable information. Don’t ruin your or anyone else’s Christmas.’

‘Operation Red Christmas targets all alcohol-related offending, and this includes drink driving. The significant impact one drink driver can have in a community is immense and I would urge people to plan ahead and think carefully during this festive period.  If you are having a drink, do not drive.’