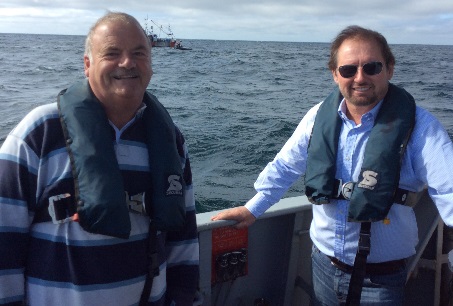 The Minister for Environment, Food and Agriculture has spoken of the importance of policing the Island’s territorial seas to ensure fisheries laws are not breached and stocks are sustained.

Sea fisheries are worth in the region of £20 million to the Isle of Man’s economy and support around 400 jobs.

Seafood such as king and queen scallops and whelks are exported all over the world, putting the Island on the map and forming an important part of the Island’s distinctive food and drink industry.

Vessels can only fish in Manx waters if they are licensed, with conditions varying from species to species.

The 22-metre Barrule was designed and built to enable officers from the Department of Environment, Food and Agriculture to enforce sea fisheries legislation.

The vessel is equipped with the latest radio navigation aids and can operate in all sea conditions in which fishing occurs. It carries an inflatable vessel that is launched from the stern to allow officers to board and inspect fishing vessels.

Vessels found flouting the law are impounded and their owners and skippers prosecuted, often paying heavy fines and forfeiting their catch.

In addition to highly publicised court cases, offenders are dealt with via formal cautions, also surrendering their catch.

During the Minister and Mr Perkins’ trip out, the Barrule’s crew of four, led by the skipper, Senior Sea Fisheries Officer Peter McParlin, demonstrated a typical day’s work, including boarding and inspecting a fishing vessel operating legally.

‘It was fascinating to view at first hand the Barrule, witness the work of its knowledgeable crew of fisheries officers and learn how it complements our Future Fisheries strategy.’

‘Sea fisheries are of immense value to our economy and it’s vital we enforce legislation to ensure vessels don’t over-exploit our fishery.

‘We have the equipment and expertise on the Barrule to track down vessels fishing in areas that are closed for conservation reasons, using illegal equipment or taking too many fish.

‘Those chancing their luck or simply failing to check licence conditions will be prosecuted, with heavy financial penalties.’

*Photo of the Minister and Mr Perkins on the Barrule