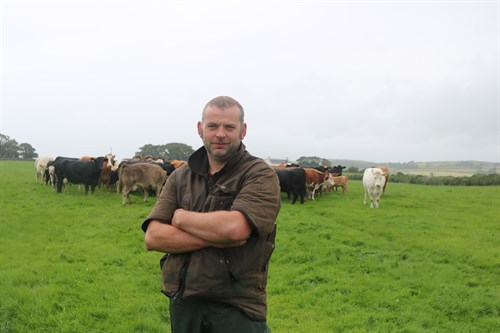 Forward-looking farmers and food producers were recognised at an annual awards ceremony this evening (Friday).

Geoffrey Boot MHK presented the Isle of Man Food and Farming Awards and spoke of the importance of innovation in both areas to the Island’s economy and environment.

‘The farmers and food producers who’ll flourish are those who have an eye on the future and seek opportunities for their businesses,’ the Minister for Environment, Food and Agriculture said.

‘The Isle of Man Government strongly encourages business growth as it seeks to further strengthen the economy.

‘Those receiving and shortlisted for these awards demonstrate a keen eye on the marketplace and willingness to diversify, an ability to work efficiently and a good use of marketing and promotion.’

James Callow, who, at the age of just 40, runs an 840-acre sheep and beef farm spread over land at Bride, Maughold and St Marks, is winner of the farming award.

Trading as Kerrowchrink Ltd, James has exchanged dairy farming for 1,500 breeding ewes and 95 suckler cows and grows barley, kale, maize and forage rape to feed them. James, who employs two people, is experimenting with new crops and has beehives, producing honey.

They started their business a decade ago selling herbs at farmers' markets.

The Island’s only certified organic food producers, they have expanded into salads, sauces and preserves, grown and produced at their premises in Patrick, where they have large polytunnels and production rooms.

They employ five people and supply Shoprite, Robinson’s, MostlyManx and the Isle of Man Government Welcome Centre as well as restaurants, caterers and cookery schools direct with their wide range of high quality products. They attend the fortnightly Food Assembly.

A recent addition to their range is edible flowers and they have created new packing and refrigeration areas. They plan to grow even more vegetables, salads and fruit from next year and their plans for greater efficiency include automatic irrigation of the tunnels and semi-automation of their jar filling and labelling.

A special award for diversification was presented to John and Fiona Anderson of Knockaloe Beg Farm, Patrick.

The former teachers returned to their native Island and rebuilt a 1740 farmhouse and buildings that had been empty for some time.

As well as being active farmers, they offer four-star bed and breakfast, self-catering, bunkhouse and glamping accommodation, with the emphasis on being eco-friendly.

They run an ‘open farm’ every Friday and Saturday during the summer, educating visitors about farm life. They have become known for their ‘live lambing’ events, run a café and gift shop, supporting local produce, and, with their popular donkey, ponies, goats and pigs, host children’s birthday parties.

Knockaloe Beg is the only Isle of Man holder of the Green Tourism Award and employs 20 people on a seasonal basis.

The Isle of Man Food and Farming Awards are supported by Shoprite and were judged by the supermarket’s senior buyer, John Speakman; Tim Baker MHK, Member of the Department of Environment, Food and Agriculture; Frank Cain, of the Manx National Farmers’ Union, and Andrew Corrin, President of the Royal Manx Agricultural Show.

Award-winners receive £200 and an engraved glass trophy from Shoprite.

‘Shoprite is always happy to support the Isle of Man Food and Farming Awards as they recognise the best of local producers, whether from the farm or from developing food manufacturers. Both provide Shoprite with the high quality local products our customers like to buy.

‘This year we were able to judge a diverse group of finalists, giving us three deserving winners.’