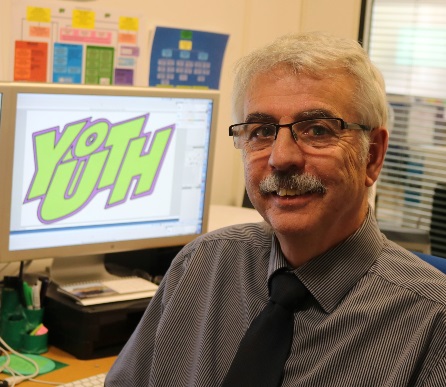 As Ken Callister retires from education, he looks back with pride on the generations of young people whose lives he has influenced and how the Isle of Man has helped them to flourish.

Ken has been a youth officer for the Department of Education and Children since 1995 and has headed the Youth Service since 2010.

Ken trained as a teacher but moved into youth work because it offers young people a different way of learning and helps them develop all-important life skills.

He gained his bachelor of education degree in rural science at the University of Bath, but admits his passions as an undergraduate were student politics and running the student union – demonstrating a desire for fairness that epitomised his career.

‘I opted for rural sciences because I wanted a practical subject and one where I’d work with less academic pupils.

‘I believed then, as I do now, that young people should be judged on their effort and positive contribution and not just on their exam grades. This ethos is embedded in the DEC, where we have a holistic approach to education.’

He chose youth work after teaching in a challenging secondary school close to the St Paul’s district of Bristol, where riots in 1980 had left their mark.

‘In school there was a highly charged atmosphere, fuelled by racial tension, but in the youth club things were different; much calmer and young people got on together. The culture and values that the youth workers brought made that difference.

‘I could see young people learning more at youth club than at school. That was the moment I made the decision to go into youth work.

‘It was against the advice of my school mentor, who said the holidays were rubbish and there was no career path.’

Ken’s first full-time youth post was in Bournemouth, the location affording him the opportunity to improve his windsurfing and sailing skills.

During 15 years with Dorset County Council, he also ran a project for the young homeless and was county arts development officer.

Since joining the Island’s Youth Service, Ken has developed its ethos ‘places to go, things to do and people to talk to’ – reflecting the fact young people are not just filling a few hours but gaining guidance at an important stage of their lives.

The service operates play clubs for primary-aged children and youth clubs for those in the early years of secondary school.

It runs projects as varied as Soundcheck for up and coming musicians, Café Laare in Lord Street and the detached youth work team, which assists young people on the streets in the evenings.

Ken also heads the Youth Arts Centre in Douglas and Ardwhallan Outdoor Education Centre in Baldwin. The Youth Service is also the Island operator of the Duke of Edinburgh’s Award Scheme, which 800 local young people work towards at any one time.

‘It’s about having the right values and a sense of adventure. I have had the privilege of working with a group of people who have felt passionately about making the Isle of Man the best place for young people to grow up. It made my job easy.’

The Youth Service relies heavily on volunteers and Ken said:

‘We are fortunate that there are so many adults in our community who are prepared to invest time in our young people.’

‘What youth work showed me was that if you can find the right activity and strike up a positive relationship with a young person, you can get them to engage with learning.

‘On the surface it might just look like they are having fun – and it needs to be fun or young people will walk away – but this engagement gives you a fantastic opportunity to introduce a challenge, get them to work harder at a skill or take a risk that will reap rewards.’

Reflecting on the harder parts of his role, Ken said:

‘Keeping people focused on and recognising the positive difference they are making has been the biggest challenge – that and convincing the movers and shakers that youth work is more than just ping pong and pool.’

Asked about his proudest achievements, Ken was typically modest.

‘I am most proud of what I have helped others to achieve.

‘I’ve establish projects that have encouraged both young people and staff to develop. I’ve never been driven to be an expert, get to the top or seek out the limelight but I’m happy to support and encourage those that are on that journey.’

Ken isn’t planning a quiet retirement, although he has built a new garden shed and, as the weather fairs up, his boat beckons.

He remains a trustee of five charities, some of them improving the lives of young people.

‘Ken has made an outstanding contribution leading the Youth Service and has been instrumental in improving lives of young people across the Island, despite recent financial challenges.

‘He has been a much valued and respected colleague, both in education and across Government, and will be much missed by us all. We wish him a very happy retirement and hope he finally gets more time with his family and time to spend on his boat.’