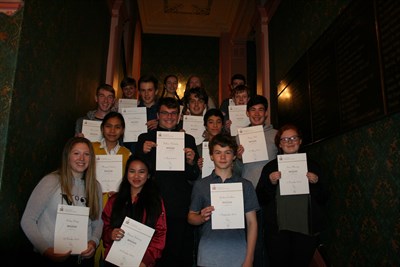 More than 170 young people received silver and bronze Duke of Edinburgh’s Award badges and certificates last night (Tuesday) – marking another successful year for the award in the Island.

The annual awards evening at the Gaiety Theatre was sponsored by Ardwhallan Outdoor Education Centre. Paul Young, former youth officer in charge there, presented the badges and certificates.

To gain a bronze award, young people aged 14 and over complete at least three months on each of three sections – volunteering, physical and skills – opting for six months on one of them.

They also plan, train for and complete a two-day expedition.

The silver award, open to those aged 15 and over, involves a minimum of six months volunteering and six months on either physical or skills, with three months on the other. They tackle a three-day expedition.

The Department of Education and Children’s Youth Service is licenced to deliver the award in the Island and does so via schools, youth groups and uniformed organisations.

Young people can also complete their bronze and silver awards via independent operating authorities such as King William’s College and the Isle of Man Air Cadets.

Some participants choose to work towards their awards independent of a unit but are welcomed by groups to complete sections such as volunteering and expedition.

The Duke of Edinburgh’s Award is 60 years old and the Island has joined in the celebrations with a number of events.

Last night saw some of those who had taken part in the Isle of Man DofE 60th Anniversary Challenge receive badges and certificates.

The challenge enabled them to complete a section of the award while also raising money for the local grant fund, which helps other award participants.

‘This is one of my favourite events of the DofE year as it represents the end of the journey through a particular award and a celebration of the personal achievements of each individual who comes forward to receive their award.’

Young people who go on to attain the gold award are presented with this at Government House at an event held each spring.