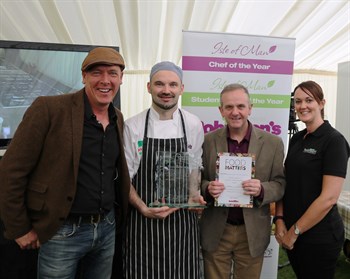 Chefs took the finest Manx ingredients and turned them into tasty dishes before a knowledgeable audience yesterday (Sunday).

Zaneta Krol, of Haworths restaurant, and David Hall, of Macfarlane’s restaurant, competed in the Chef of the Year final at the Isle of Man Food & Drink Festival.

They awarded Zaneta the title, a trophy, £500 cash and £500 for her restaurant to spend on advertising after she impressed them with her dish of Manx honey parfait with Okells Aile porter sorbet – cooked in a kitchen specially created for the event by Magnet.

Gareth said both chefs displayed great skill and confidence and it had been difficult to choose a winner.

The competition demonstrated how Manx produce could be put to imaginative use to create such varied dishes, he added.

Meanwhile, John McMullen became the second ever Student Chef of the Year at the festival and took home a trophy and £250 cash.

John cooked a rack of Manx lamb cooked in hay with courgette and mint and Manx cheese potato cake, with carrot and turnip puree and a red wine sauce.

Judges had a tough time deciding between John’s dish and Henry Tung’s creation – cooked pan-seared Manx duck with caramelised figs and onions, accompanied by a peppered rosti, bacon and sage crumb and a blackberry and port jus.

Both John and Henry learned their trade at University College Isle of Man (UCM) – which offers BTEC, GCSE and NVQ qualifications in hospitality, catering and food and drink – and qualified for the final through heats held at UCM.

John now works for The Courthouse while Henry works for Jak’s Bar and Steakhouse.

All four chefs had a time limit and the pressure of a large audience and fielded questions put to them by comperes Tony Quirk, a leading local chef, and Chris Franklin, Chef Lecturer at UCM.

Dishes were judged on use of local ingredients, taste and presentation.

‘The chefs demonstrated the versatility of Manx produce, creating four completely different dishes that went down a treat and were hard to separate for judging purposes,’

‘The standard of competition was incredibly high, reflecting the quality of training at UCM and of our fine local restaurants.’

‘As Robinson’s celebrates 130 years of selling high quality Manx produce to local chefs, we were delighted to again support these competitions and to see the varied dishes that resulted.’

The finalists’ recipes can be found on www.gov.im/food

The competitions were among the highlights of the two-day Isle of Man Food & Drink Festival, held in the Villa Marina Gardens, which drew large crowds.

‘The continued growth of the food and drink sector, being driven via our Food Matters strategy, is heartening to see.

‘The festival is the showpiece event of the year, bringing together all those with a love of Manx produce in one fantastic setting to eat, drink, pick up recipes, enjoy demonstrations and entertainment and take home products to try.

‘Gareth Wyn Jones is a great character and was a huge hit with festival-goers and exhibitors alike and his tweets from the festival brought valuable extra publicity.

‘I’d like to thank Gareth, Magnet IoM Ltd, Robinson’s and everyone else who made the festival such a success.’