Celebrations to mark 70 years of comprehensive education in the Isle of Man began today when an exhibition of memorabilia from Ramsey Grammar School opened its doors.

The Island led the way in introducing comprehensive education, inclusive to all students regardless of academic ability or income. The ethos is still at the heart of education in the Isle of Man today.

It is thought the schools were the first truly comprehensive schools in the British Isles. In England, comprehensive education wasn’t widely introduced until 1965.

The exhibition is among a number of events planned to celebrate the landmark.

It was compiled after Ramsey Grammar School appealed to former staff, pupils and the public for the loan of items of uniform, reports, photos and newspaper cuttings.

‘At Ramsey Heritage Centre we are always looking at ways to encourage people to investigate the history of the town.

‘This exhibition to commemorate the 70 years since Ramsey Grammar School led the way, with Ballakermeen, as possibly the first true comprehensive schools in the whole of the British Isles has sparked a great deal of interest.

‘We have received a good selection of old photos and memorabilia from numerous former staff and pupils and we plan to use as much as possible to create a display reflecting the evolution of the school over the past 70 years.’

Among the most prized items on show will be a tablecloth bearing the embroidered signatures of hundreds of former staff, which has been gifted to the school by Sheila Waiting, widow of biology teacher Brian Waiting.

In the 1960s, Mr Waiting began a tradition of getting those leaving the staff to sign the cloth and the names were then embroidered over.

It depicts the front view of Ramsey Grammar School East building from a photograph by Peter Enright, a recent student.

It carries a stamp featuring Lezayre Church and a special one-day postmark bearing the school’s badge and Latin motto Nil Amanti Difficile (Nothing is difficult to an enthusiast).

The covers are available at the school from today.

The opening also featured the first screening of a film, “Tell Me About Ramsey Grammar School”, recorded by history teacher Andrew Wilkinson and featuring past pupils.

‘The intergenerational Tell Me Project ran for many years in schools and I have retained the format in filming the anecdotes of many former pupils, among them Mrs Craine. The film can be seen as part of the exhibition.’

Ramsey Heritage Centre is in Quayle’s Hall, next to the Manx Electric Railway station.

It is open from 10am to 4pm, Monday to Saturday. 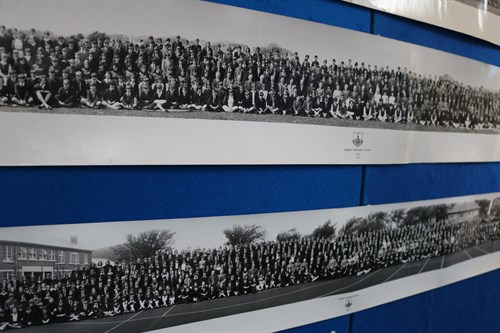