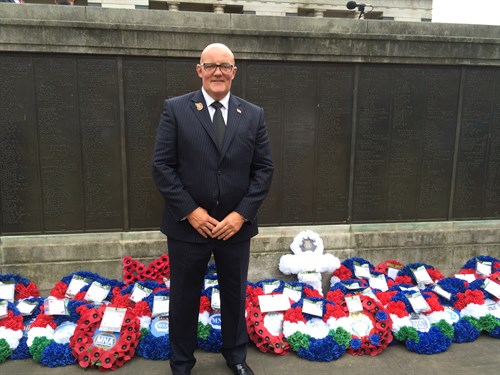 The Isle of Man honoured merchant sailors who served in both World Wars and the years following by celebrating Merchant Navy Day earlier this month.

In London, Dick Welsh, Director of the Isle of Man Ship Registry and former merchant seaman, took part in the Merchant Navy Day Service and laid a wreath on behalf of the Island at the National Merchant Navy Memorial in Trinity Square Gardens, Tower Hill on 4 September. In the Isle of Man, public building flew the Red Ensign.

Laurence Skelly, Minister for the Department of Economic Development, commented:

‘The work of the Merchant Navy was vital in both World Wars and continues to this day. It is a pleasure to be able to honour serving, veteran and fallen seamen. The Isle of Man has a fascinating maritime history and strong international ties with the shipping community and we were proud to raise the Red Ensign in support.’

‘It was an honour to be chosen to lay a wreath on behalf of the Isle of Man. As an island nation, I believe we have a special affinity with the sea. Paying tribute to those who served on merchant vessels, often under perilous conditions, is a subject close to my heart. Many Manx sailors served, and continue to serve, under the Red Ensign and we are, understandably, very proud of our own Manx Ensign’.

Merchant Navy Day celebrates the role of the British Merchant fleet during the two world wars and their continued work around the globe today.

The memorial bears the names of 35,842 merchant seafarers, men and women, civilians all, from the First and Second World Wars, together with the Falklands Campaign for whom there is ‘no grave but the sea’.