The prosecution of a fishing boat skipper reiterates the Department of Environment, Food and Agriculture’s (DEFA’s) commitment to the protection and sustainability of fisheries in Manx waters.

That is the message from Geoffrey Boot MHK, Minister for Environment, Food and Agriculture, after a court fined Christopher Thomson £12,000 plus £50 costs and ordered him to forfeit his catch of queen scallops, worth £4,596.

The UK-registered Tobrach N was identified as operating in Manx waters by satellite tracking of its transponder.

As the vessel was not licenced to fish in the area it was targeted for enforcement action. Officers on DEFA’s fisheries protection vessel Barrule boarded the vessel eight miles south east of the Chicken’s Rock lighthouse last Thursday and confirmed that the vessel was fishing for queen scallops.

The vessel, skippered by Mr Thomson, was escorted to Douglas, where it was detained.

Mr Thomson, of Woodlands Avenue, Kirkcudbright, appeared before the Deputy High Bailiff on Monday and admitted fishing without a licence.

Mr Thomson was new to the vessel, having only taken over command two days previously, the court heard.

He accepted that as skipper, it was his responsibility to ensure he adhered to the law, but said the vessel’s owners had informed him there was a valid licence.

A licence to fish in Manx waters was issued to the previous owners and expired on the sale of the vessel. The current owners had not applied for a licence, the court was told.

‘Fishing is a multi-million pound industry for the Island and the long-term sustainability of stocks is vital to our economy, hence we licence activity.

‘We are proactive and will continue to apprehend and prosecute anyone we find flouting the law in Manx waters.’ 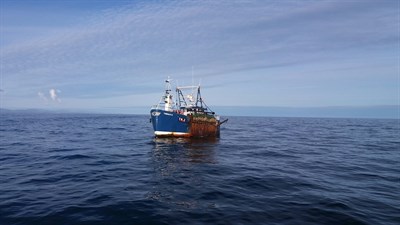