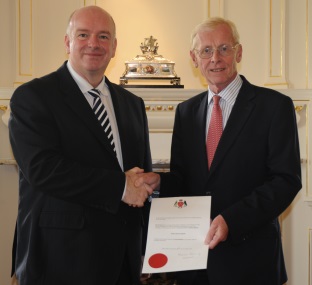 Former Health and Social Care Minister Howard Quayle has been appointed as the new Chief Minister of the Isle of Man today (Tuesday October 4, 2016).

The Middle MHK was elected to the position by Tynwald, the Island’s parliament, of which he has been a member since 2011. He takes over as leader of the Manx Government from Allan Bell, who is stepping down after a long and distinguished career.

Mr Quayle (49) has served as Minister for Health and Social Care since 2014. He was formerly chairman of the Planning Committee and of the Manx Electricity Authority, as well as being a member of the Department of Economic Development, the Department of Infrastructure and the Economic Policy Review Committee.

Following his election by Tynwald Mr Quayle was formally appointed as Chief Minister by the Lieutenant Governor His Excellency Sir Richard Gozney.

‘It is very great honour to be chosen as the new Chief Minister of the Isle of Man, and I am grateful to Tynwald for so strongly supporting my nomination. I intend to lead an inclusive government that works hard, and works together, to secure a sustainable future for the people of the Island.’