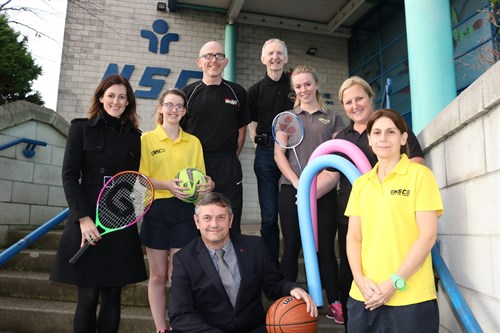 A sporting event for secondary students will become a firm part of the school calendar after it encouraged them to get active and sign up to clubs.

The Community Games was launched in 2016 with support from Microgaming through its PlayItForward initiative.

Aimed at 11 to 18-year-olds who don’t belong to a school, club or Island team, the games were attended by students from the Department of Education and Children’s five secondary schools.

Manx Sport and Recreation (MSR), which ran the games, says the event will be called the Microgaming Community Games in future to further highlight the company’s support.

The 2017 games will take place on Wednesday 21st June.

‘The games give students the chance to try sport in an environment where the emphasis is on enjoyment and not results.

‘Participants are encouraged to stay involved with sport and to join community clubs.

‘The health advantages of being active are clear but membership of a club can lead to lifelong friendships. It can open doors to officiating, coaching, sitting on committees and developing skills that give young people confidence and self-esteem to flourish away from sport.’

After the inaugural games, sports are already experiencing an upsurge in membership from young people.

Ken Kinrade, Chairman of the Isle of Man Billiards and Snooker Association, said: ‘We held follow-up coaching sessions for games participants which attracted two new players. Resulting from these sessions, we attracted four other juniors through word of mouth and even two new adults. This is in no small part due to the showcase provided by the Community Games.’

‘We picked up six new youngsters after the games. We ran a follow-up session in October and 14 new players attended.’

‘The inaugural Community Games was a great success and we are proud to see it in the school calendar again in 2017.

‘This year we saw first-hand how much fun students had trying new sports in a relaxed and non-competitive environment. I have no doubt the 2017 event will be just as successful, if not more.’