Three students from the Isle of Man are heading to the US for an out-of-this-world two-week adventure to study with astronauts, engineers, and scientists at the NASA United Space School. This means 30 Island students have won the ManSat scholarships since the competition began in 2000.

The sixth-form students will spend a fortnight at the Space School, living with US families and working with peers from 21 other countries where they will work to plan a simulated mission to Mars.

Rose is studying maths, computer science and drama at A-level. She said:

‘I’ve been interested in space since I was young, and love shows like the X-Files. It was this sort of sci-fi that got me interested in the stars. I can’t wait to meet everyone – I’ve already started talking to some of the other students online and they are all so friendly. I’m aiming for a career in AI development, but if I make connections in the space industry, I could try and use the same career, but for a Mars Rover or something along those lines.’

Julius is studying the International Baccalaureate, including maths, physics and chemistry at Higher Level.

‘Since my early childhood I've been fascinated about spaceflight and in particular manned spaceflight to the International Space Station and the moon,’ he explained. ‘International collaboration and the benefits for everyday life are reasons why space impresses me greatly, but ultimately the physics and technology are the areas I'm interested in most. When I learned about that I could apply for this great opportunity, I didn’t have to think long! When I was notified that I had been selected I couldn’t believe it.

‘I’m looking forward to the possibility of speaking to an astronaut aboard the ISS and learning more about how mankind is able to build a station supporting life in such hostile conditions. Until now I have been thinking more about a career in aeronautical engineering, since it seemed more achievable than engineering in the field of space. But this opportunity will allow me to learn more about the options available in the space industry.’

‘I’ve been fascinated by space since I was a child, but thought of it as more fantasy than reality,’ said Laurence, who is studying chemistry, history and physics at A-level. ‘The scholarship competition showed that space was in fact very real, and that careers can be made around it. I’ve thought for a few years about science as a career, but never had much idea what sort of path I would end up on – I think this trip may well serve to focus my mind.’

The company first offered a scholarship to the United Space School in 2000, with Jennifer Stone the first student to win a place. Last year, having spent several years studying and working in Japan, Jennifer returned to take up a post with ManSat. In 2007, ManSat started offering two scholarships a year to the Space School always working in cooperation with and with the support of the Department of Education and Children.

‘We are thrilled to be offering three scholarships this year, and I’m sure Rose, Laurence and Julius will have a fantastic time and make so many new friends and contacts. Many of our previous scholarship winners have gone on to forge successful careers within the space industry both here at home on the Island and abroad, with the contacts they establish at the Space School providing them with a crucial advantage.  We are also and as ever always grateful to the Department of Education and Children for their crucial cooperation and support of this opportunity for Manx students.’

‘Part of the experience is the opportunity to promote the Isle of Man, and each year the scholars take part in the “talent show” at the Space School Culture Faire, where they showcase their homeland. I can’t wait to welcome the scholars to Houston and hope they have a wonderful time.’

ManSat Chief Financial Officer Ian Sanders explained: ‘We work closely each year with the Department of Education and Children to run this competition and award the scholarships. We visit each of the Island’s high schools and talk to Year 12 students about the competition, which involves writing essays on three space-related issues, and the standard across the board was incredibly high.’

‘My Department greatly values this scholarship, which has enabled many students to have the experience of a lifetime at Space School.  We also note that this year’s students are the 30th to win the competition in total since 2,000.  The combination of Science, Technology, Engineering, Arts and Math – S.T.E.A.M. education – is a powerful one for the 21st Century workplace.

‘With a British astronaut having just returned from the ISS and commercial space travel becoming a reality, learning opportunities for young people now extend well beyond this planet. It’s important our young people understand the scientific possibilities and solutions that space exploration offers and I look forward to meeting the scholarship winners on their return from Houston to hear all about their experience.’

ManSat also supports the annual Conrad Spirit of Innovation competition for Manx high schools, in cooperation with Apollo Astronaut Pete Conrad’s Foundation, and has sponsored Island high schools to participate in the UK Rocketry Challenge. In addition, the company awards an annual ‘ManSat Fellowship’ grant, for Manx students seeking to further their studies in space, and scholarships to programs run by the International Space University in Strasbourg.

Please visit www.unitedspaceschool.org for more information about the Space School and www.mansat.org for details of the company’s scholarships, and www.mansat.com for more details on ManSat itself. 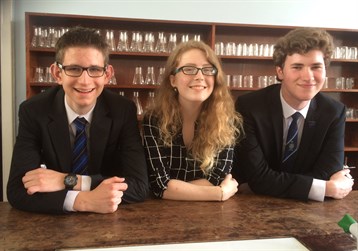