Tynwald will be asked to back a proposal for Government to purchase a newly-built care home in Douglas, to address the lack of affordable nursing home places on the Island and the wider impact this is having on health and social care services. 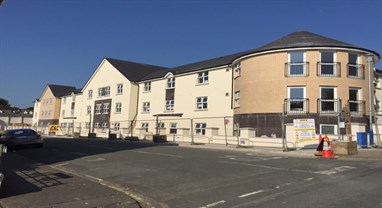 The 68 bed facility, on Salisbury Street, is approaching completion.  The Department of Health and Social Care is seeking approval to spend up to £8.1 million of capital funds on the purchase, which Minister Howard Quayle MHK describes as: “a catalyst that could ease gridlock within the Island’s health and social care system”.

Minister Quayle said: “This proposal is a bold move by Government to address some of the challenges our Island faces in supporting our ageing population appropriately.  An increasing number of patients are becoming ‘stranded’ in Noble’s Hospital or left with no choice but to remain in residential care – without nursing provision – unable to afford the move to a nursing home.  We must address this situation to ensure the right level care is delivered in the right setting for all.

“On cost alone, it simply does not make economic sense to leave patients, who are ready for discharge to a nursing home, in Noble’s Hospital which is generally more expensive.  It is clear that action needs to be taken to reduce our costs and to free up capacity in the hospital, with some wards regularly operating at full occupancy.”

At present, all of the Island’s nursing homes are privately operated and set their own fees based on market forces.  Nursing home care is privately funded, although those who are unable to pay can claim a number of benefits to help with the cost.  Since May 2015, however, the weekly cost of nursing home accommodation has been higher than the maximum benefit rate paid through social security – currently £819.80. This has led to additional top-up payments of as much as £105 per week per person being required.

As a consequence a growing number of people are unable to afford a nursing home place, with around 35 people currently in residential care or at Noble’s Hospital unable to move to a nursing home.  With demand outstripping supply, there is an impact on the quality of care, the ability to accommodate new residents and patients, and an adverse effect on the Department’s finances.

If the care home is purchased, the Department plans to run an open procurement process to identify an organisation to operate the facility.  Two thirds of the beds would be made available at the maximum benefit rate payable through social security, with the remainder available as private placements.

If no provider were identified, the Department would seek to establish an ‘arm’s length’ provider separate to, but wholly owned by, the Government, as a last resort.

By having a stake in the nursing home sector – as the Department does with residential homes – and increasing overall capacity, it is hoped Government can stimulate the market.

The purchase, if approved by Tynwald, is subject to final negotiations.  It is anticipated that buying the care home would provide an immediate solution to the availability of nursing care beds whereas a Government development would have a number of obstacles to overcome, not least the time it would take to design, plan and develop such a facility.

Like most developed countries, the Isle of Man has a growing number of older people who are living longer than any previous generation.  Over the next 20 years the number of people on the Island aged 65 and over is projected to grow from 17,000 to 26,500 – an increase of 55%.

The Minister concluded: “This is a medium term solution to help alleviate an urgent problem causing us serious concern and difficulty.  I believe it offers good value for money for the taxpayer and has the potential to make a significant impact on our capacity to provide good quality care for older people.

“The future growth of our older population will have implications for a number of public services – not least health and social care – with an estimated 411 additional care beds needed between now and 2036.  That’s the equivalent of a new care homes being built every two years.

“We must continue to plan carefully for the long term to ensure a sustainable solution that enables us to maintain Government’s focus on protecting the vulnerable in our community.”