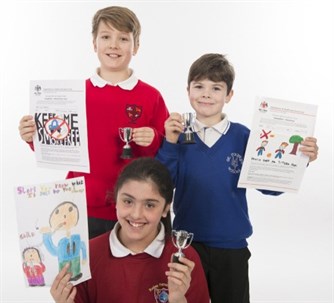 The Department of Health and Social Care’s Public Health Directorate recently held a ‘Please Keep Me Smoke Free’ competition encouraging children in school years 1 to 6 to draw a picture that could be used as a sign to promote a smokefree area.

The competition was very popular, with 76 colourful and imaginative entries received from various primary schools, Beaver Scouts and the general public.

'The entries were of such a high standard that four independent judges found it very difficult to decide on the winners. Children submitted bright images which portrayed their concerns about people smoking near them or in a car. The judges eventually decided on three winners, one highly commended, and eight commended. We were particularly astounded with the quality of the first prize winner’s design, and will be using his picture on all our smokefree cars campaign work.'

First Prize was awarded to Daniel Millward, Age 10, Victoria Road Primary School, second prize to Pat McGeown, Age 7, St Mary’s Primary School, and third prize to Leela Menon, Age 10, Rushen Primary School. They were each presented with a certificate and received National Book Tokens to the sum of £30, £20 and £15. 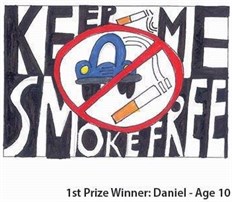 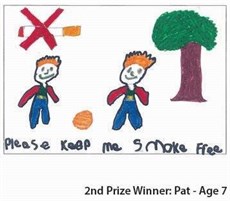 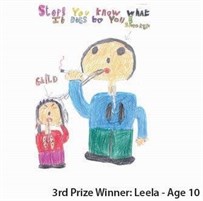 Daniel’s winning drawing has been made into a ‘Keep Me Smokefree’ car sticker that is available free to the public. When Daniel was asked what he thought about his design being printed on thousands of car stickers, he said:

'It’s unbelievable! I didn’t think I could win.'

The second and third prize winners commented on the inspiration for their drawings.

'When I go to the park, I don’t like people smoking around me.'

Leela Menon’s motivation was related to her family. She said:

'I wanted to stop my mum smoking. I saw the lungs on the cigarette packages.'

Many of the competition entries will soon be available to be viewed at www.Quit4You.gov.im.

The children’s drawings are also being used on posters and leaflets for the smokefree cars campaign and in future work.

The smokefree cars campaign materials will soon be distributed around the Island.

For a free car sticker, or more information about help to quit smoking, visit www.Quit4You.gov.im, email tobacco@gov.im or phone Quit4You on +44 1624 642404.

For more information about the new law banning smoking in vehicles with someone under 16 present that comes into effect on 30 March 2016 (including leaflets to download), visit www.gov.im/smokinglegislation or phone the Environment, Safety and Health Directorate (DEFA) on +44 1624 685894.