Planning approval has been granted for the scheme to replace the bridge in Laxey that was destroyed by the flooding in December.

Subject to a 21-day period for appeal, work is expected to start on site during March.

The new single-span bridge will reduce the likelihood of any future flood damage by allowing the river to flow unimpeded out to sea. The design will also give pedestrians greater priority and reduce the number of vehicles that use Old Laxey as a short-cut through the village.

The initial phase of construction will involve the installation of reinforced concrete foundations and abutments. Steel beams will then be put in place, along with ducting for utilities. Surfacing materials, street furniture and lighting will complete the project, with the overall design adopting the visual themes of the small lighthouses on Laxey harbour.

Work will be carried out by the Department of Infrastructure in partnership with a private contractor.

Infrastructure Minister Phil Gawne MHK said: ‘The replacement bridge will be better equipped to survive the sort of flooding that devastated homes and businesses in the village at the end of last year. Now that planning approval has been granted I am looking forward to seeing good progress being made so that the people of Laxey have a fully functioning bridge in place as soon as is practicable.’

The Minister had pledged to revise the plans if the majority of registered voters in the village contacted the Department to request a change. This offer generated 76 responses. The number of people on the electoral register in Laxey at 1 January 2016 was 1,153.

Mr Gawne said: ‘Even if all those who wrote in were registered voters in Laxey and all had objected to the proposal, which was not the case, the total response was just over 500 short of a majority. While there is clearly still support for a stone arch design, I was encouraged to see that many people are content with the Department’s proposal and that others recognise the imperative of flood prevention.’

He added: ‘I would like to thank everyone who took the trouble to write to me. I am not assuming that the 1,000 registered voters who didn’t respond are all content, but it is clear that their views were not strong enough for them to send an email or letter. That said, the Department will reflect on the feedback received.

‘I am pleased that we have been able to listen further to the people of Laxey. Whilst this consultation was perhaps somewhat rushed, we will wherever possible try to make sure that people have ample opportunity to put their views forward. I am, of course, grateful to those who did contribute in the limited time available.’

As part of the proposals, the Department will take the opportunity to improve the road junctions between Glen Road, Minorca Hill and Breeze Hill and to enhance sections of the retaining wall near the bridge. 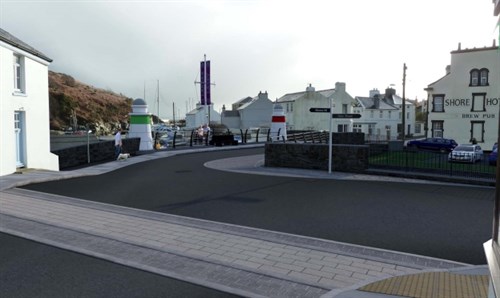