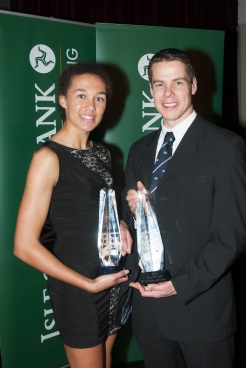 Nominations are invited for the 2016 Sport Awards, which will take place on Wednesday 22 March 2017 at the Villa Marina.

The main sponsor of the event will be Isle of Man Bank, which has a long-term affiliation with the awards.

‘From grass roots level to our elite international athletes, these awards recognise those who make the Island so successful and renowned at sport.’

Organisations and individuals can submit nominations in all/any of the following categories:

Nominations should include brief details of the nominee’s achievements and why he/she is worthy of an award.

Nominees must be Manx-born or have resided on the Island for at least two years. Nominees for the junior awards must be under 21 on the 31 December 2016.

Nominations can be made via a form which can be downloaded from at www.isleofmansport.com or by post or email to:

The closing date for nominations is Tuesday 31 January 2017.

*Photo showing Tim Kneale and Catherine Reid being crowned Sportsman and Sportswoman of the Year at the 2015 Isle of Man Sports Awards.