David Hall from Macfarlane’s restaurant and Zaneta Krol from Haworths restaurant, both in Douglas, will contest the Chef of the Year title at next month’s Isle of Man Food & Drink Festival. 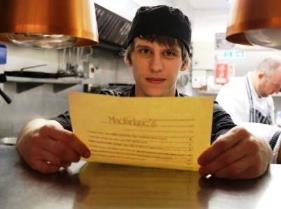 ‘Both finalists have done so well to get through to the final. Congratulations to them.

‘David has shown great maturity, coming through Isle of Man College of Further and Higher Education and developing so well as a chef at our restaurant.

‘His dish showcases Manx seafood and Manx produce with imagination and skill and I will be delighted to include his dish on our menu soon.’ 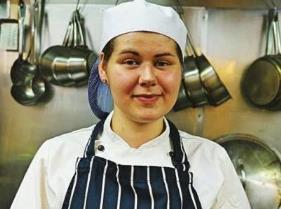 ‘Being in the Chef of the Year final gives me an amazing opportunity to showcase the wonderful ingredients that the Island has to offer.

‘My honey dessert focuses on an ingredient that, in my opinion isn't utilised enough. It is a natural product that the Island can be proud of.’

Student Chef of the Year finalists Henry Tung and John McMullen are learning their trade at University College Isle of Man (UCM) – which offers BTEC, GCSE and NVQ qualifications in hospitality, catering and food and drink.

Henry will cook pan-seared Manx duck with caramelised figs and onions, accompanied by a peppered rosti, bacon and sage crumb and a cherry and port jus.

John’s dish is a rack of Manx lamb cooked in hay with courgette and mint and Manx cheese potato cake, with carrot and turnip puree and a red wine sauce.

The competitions are sponsored by Robinson’s, which is celebrating 130 years in business.

‘The competitions attract a large and knowledgeable audience keen to see Isle of Man food and drink created into delicious dishes using the chefs’ flair and imagination.’

The competitions are among the highlights of the Isle of Man Food & Drink Festival, sponsored by kitchen specialists Magnet IOM Ltd, which takes place at the Villa Marina Gardens on Saturday 17 and Sunday 18 September.

Tickets for the festival cost just £3 (day) and £5 (weekend) for adults, with admission free for under 16s.

Tickets can be booked via www.villagaiety.com

For more information about the festival, visit www.gov.im/food, follow the festival on Facebook via Isle of Man Food and Drink Festival 2016 and on Twitter@iomfoodanddrink