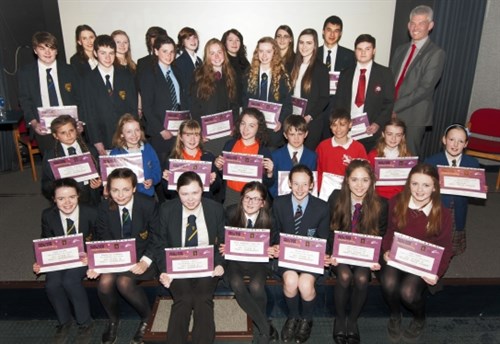 That was the comment from Tim Crookall MLC, Minister for Education and Children, as he presented winning and highly commended authors in the Hall Caine Prize for Creative Writing with prizes.

Students aged 21 and under in full-time education were invited to pen a short story, a memoir or the opening chapter of a novel on the subject of ‘echoes’.

The prize – named after the distinguished Manx novelist – attracted 924 entries.

The Minister said the competition boosts literacy in the classroom and encourages children to stretch their imaginations.

‘We know that children and young people will produce writing of a higher quality when they can see the purpose of it, and this competition gives a real meaning and reason for them to write,’ he said. ‘It also inspires them to challenge themselves and produce the best they can possibly achieve.

‘Imagination is key to development of not only their literacy skills but also in understanding what motivates and inspires them as people.’

The competition was founded and is sponsored by Gloria Rukeyser, great-granddaughter of Sir Hall Caine.

Mrs Rukeyser is, like her famous ancestor, a writer and journalist. Her family still occupies the novelist’s former home, historic Greeba Castle.

She said: ‘I am once again impressed and delighted by the enthusiasm and talent shown by young writers of the Isle of Man.’

Scarlett Christopher-Everett, nine, of The Buchan School, won the £100 Primary first prize with a story called ‘Echoes from the Baie yn Ooig’. She said: ‘I chose to write about Baie yn Ooig’ – Port Erin bay – because I love living here and I relish investigating the beach, caves and creating stories based on Manx myths. In my story, my curious characters were the Manx fairies and Tarroo Ushtey, the mysterious water bull. I used similes and metaphors to devise a realistic story for readers.’

Amy Hawke, 13, of King William’s College, won the £150 first prize in the Key Stage 3 category of the competition with her ghost story, ‘Echo’. Amy said: ‘When I was confronted with this year’s theme, I felt confused and felt there were a number of ways to go with it, such as parallel dimensions and historic events. But on reflection I thought “what would the echo of a person be?” I felt the answer to that was, perhaps, a supernatural being. The one thing that was important to me to convey in my writing was my initial feeling about the theme – confusion. Hopefully that comes across in my story.’

Xifong Christian, won the £175 first prize in the Key Stage 4 section for the second year in a row, with his story, ‘Hourglass’. The Ballakermeen High School student, 15, said: ‘The inspiration for my story was an hourglass I found. It sat on my desk for a few weeks and got me thinking about time, and our movement through life. For me, it became a metaphor for human experience compressed into a single object and timeframe.’

Charlotte, who has been among the prizes in the competition three times, said: ‘I am delighted to have finally won first prize, having been a runner-up in the previous two years. Humour is the most important element of my writing and this year’s story was about a scientist with a life-long quest to determine if duck quacks echo. I decided to enter it at the last minute, so I was amazed to hear the good news.’

They scored the entries on strong characterisation, good narrative flow and imaginative story-telling.

The Minister thanked the judges for giving their time to scrutinise the entries.

The theme for the 2016/17 prize will be announced in September.

For information on the competition, Sir Hall Caine and Mrs Rukeyser, visit www.gov.im/hallcaine