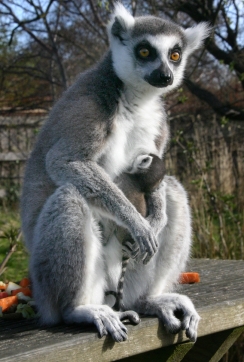 Baby ring-tailed lemurs have been born to two of the park’s resident females, Acorn and Sakarana.

Lemurs are indigenous to the island of Madagascar. Classified by the International Union for Conservation of Nature as endangered, they are nonetheless common in zoos, their striking markings and friendly nature making them popular with visitors.

Kathleen Graham, General Manager of the park, said: ‘Both new mothers are doing well with their babies. In the wild, only about half of new born lemurs survive beyond a year and only three in 10 to adulthood due to predators, harsh conditions in the wild and falls, but we are hoping we will have a better success rate here at the park, where life is a little easier.’

She added: ‘Females were only reintroduced to the park last year, so these are the first babies for some time.

‘At present they can be seen clinging to their mothers’ bellies and then for a while mothers will carry the little ones on their back before they start to venture off by themselves.

‘We are looking forward to them becoming more independent as they start to explore their surroundings.’

The park, in Ballaugh, is open seven days a week until the end of October from 10am to 6pm (last admission 5pm). Individual and family tickets and annual memberships can be purchased online via www.curraghswildlifepark.im