The Isle of Man Constabulary’s social media channels will play a key role in efforts to promote road safety during this year’s TT Festival.

@TweetbeatIOM will help to keep Twitter followers up to date with important information such as road closures and traffic diversions. Using the hashtags #SafeSummerRidingIOM, #ShareTheRoadIOM and #IOMTT, it will also provide useful safety advice and guidance, as well as crime prevention tips.

The Manx police force’s digital presence will support the traditional TT poster campaign, which encourages people to take extra care on the Island’s roads during the two-week festival.

Striking images are used to portray the consequences of careless riding and to highlight the central message ‘For All Our Sakes, Slow Down’. One poster shows a badly damaged motorcycle in a wheelie bin, with the strapline ‘Don’t Bin It’, a play on the phrase used by bikers to describe a crash. Another depicts a biker travelling on the TT course above a photo of an injured rider heading home on foot, with the message ‘Biker to Foot Passenger.’

Posters will be displayed at ports in the UK and Ireland used by visiting fans and at prominent locations around the Isle of Man, including TT campsites and popular vantage points on the Mountain Course. Visitors can download general information from the Government website prior to travelling to the Island.

Members of the Roads Policing Unit and Road Safety Team will also be out and about during the TT to stress the importance of keeping speeds down, maintaining a safe distance from other vehicles and abiding by the central white lines. The campaign is targeted towards all road users and primary schools will be given a TT road safety worksheet to raise awareness among children.

A one-way system will again be in place on the Mountain Road in a bid to reduce the number of collisions and unmarked police vehicles will be deployed throughout the Island to enforce the rules of the road.

‘The significant increase in people and traffic makes the TT an extremely demanding time of year for frontline services. The wellbeing of residents and visitors is of paramount importance and a lot of planning goes into the event to make it as safe and enjoyable as possible. We want everybody to have fun, behave responsibly and remember TT 2015 for the quality of the racing and great atmosphere.’

‘The use of social media strengthens our commitment to high-visibility policing and face-to-face communication during the TT. By integrating our Twitter account @TweetbeatIOM into the road safety campaign we can enhance the service we provide and help to protect vulnerable people.’

Visitors are also reminded that while the TT takes centre stage, everyday life continues in the Isle of Man, with people commuting to work and commercial vehicles out on the roads.

‘Riders are encouraged to share the road responsibly and be aware that it’s business as usual for heavy goods vehicles making deliveries to local businesses. A brief lapse in concentration can have tragic consequences, so bikers should always ride to the conditions and adhere to speed limits. I would also urge fans to get to their favourite spectator spots well ahead of races getting under way. The roads are at their busiest – and the most collisions occur – in the “golden hour” immediately before the course closes. Our message to visitors is: ride well within your limits, obey the law, go home safely and come back and enjoy our beautiful Island again soon.’ 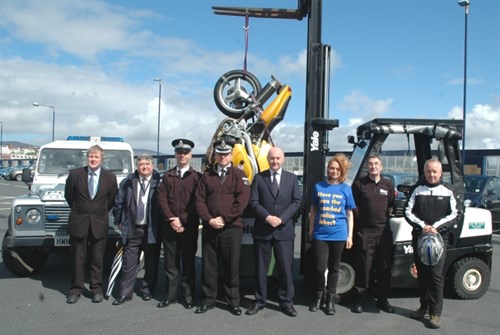