If it does, it will condemn the Isle of Man to damaging long-term effects, including even worse flooding than we have recently seen, as higher sea levels are combined with storm surges such as those seen at the start of 2014. 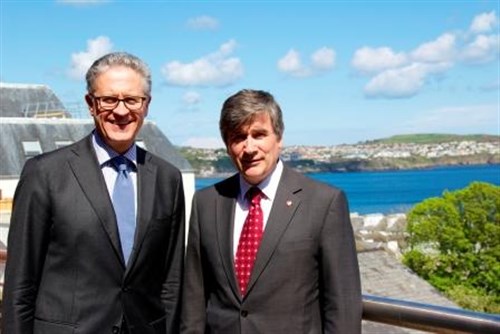 That’s the message from Phil Gawne MHK, Minister for Environment, Food and Agriculture, who was speaking after the visit by Professor Thomas Stocker, one of the world’s leading experts in climate change and its effects on the planet.

Professor Stocker co-chairs ‘Working Group I: The Physical Science Basis’ of the Intergovernmental Panel on Climate Change (IPCC). Its Summary for Policymakers – based on a 1,535-page report assessing more than 9,000 scientific publications – was approved by IPCC-member governments in September last year.

The Professor of Climate and Environmental Physics at the University of Bern’s Physics Institute in Switzerland, he addressed gatherings of Manx politicians, environmental groups and the public this month.

The Professor said three main questions were raised: Is the human influence on the climate proved? If so, why haven’t temperatures risen significantly over the past 15 years? Will rising sea levels be a problem for the Isle of Man?

The Professor said there was ‘no physical mechanism other than the increase in carbon dioxide concentration in the atmosphere that can explain the warming that has been measured worldwide since 1950, the rapid reduction of summer sea ice in the Arctic, the melting of ice sheets in Greenland and Antarctica, the extra energy that is stored in the ocean and many other fingerprints observed around the world’.

He said the climate varied naturally from decade to decade and ‘15-year trends are not suitable to investigate long-term climate change’.

Giving an example of why warming patterns can’t be properly plotted, he said the precise occurrence of a volcanic eruption, which would cool the world for one or two years and significantly influence the climate, cannot be predicted.

‘Sea level is projected to rise between 0.26 metres to 0.55 metres (if global average temperature rise is kept to 2°C), or 0.45 metres to 0.82 metres by the end of the 21st century under a ‘business as usual’ scenario. This rise, together with the occurrence of high sea level events, will pose major challenges for erodable coast lines,’ the Professor said.

The Isle of Man Government’s plans for tackling climate change include reducing greenhouse gas emissions to 80% below 1990 levels by 2050, assessing the risks from climate change and adapting to these risks and introducing an energy efficiency scheme for domestic and commercial properties.

Minister Gawne commented: ‘Governments around the world agree the effects on the planet from burning fossil fuels are already being seen and substantial and sustained reductions in greenhouse gas emissions are necessary to avoid dangerous levels of climate change.

‘Some feel that as we are such a small nation we can’t possibly make a difference, so we should sit back and let others do all the work, but it is difficult to argue that we should be entitled to produce more than our fair share of greenhouse gases. We owe it to the generations to come to take a mature approach to this and to take action.

‘You can imagine the additional impact that storm surges such as those experienced this year will have as sea levels increase. This is why my Department is developing policy to mitigate against further climate change and adapt to the effects of unavoidable climate change.’

The Minister said: ‘It was great to hear first-hand from an expert of the global standing of Professor Stocker and we will invite more leading speakers to our Island to help us better understand this issue.’

A video of Professor Stocker’s public talk will appear on www.youtube.com/user/IsleofManGovernment

The IPCC was established by the United Nations Environment Programme and the World Meteorological Organisation in 1988 to provide the world with a scientific view on the current state of knowledge in climate change and its potential environmental and socio-economic impacts.

This IPCC assessment cycle will be completed by the ‘Synthesis Report’ in October, which will bring together the physical impact and economic aspects on human-induced climate changed.

Attached is a photo of the Minister with Professor Stocker.