The Department of Education and Children is stepping out to boost a charity raising money to equip primary schools with defibrillators.

The Minister is a veteran of many walks and hopes to go further than in the past, having reached Peel (32.5 miles) several times. He’s training by walking between his home in Peel and Douglas, where the Department is based.

It’s Danita’s first attempt at the event and she has in her sights Rushen, which is 19 miles from the start at the NSC.

Craig’s Heartstrong Foundation has launched a £60,000 appeal to buy defibrillators for all primary schools that don’t have one. Of the Island’s 35 primaries, only two have the equipment, which could save a pupil’s life in the event of a heart stopping.

The charity is also raising money to assist St John Ambulance in training primary staff in use of the machines.

Its appeal comes after it equipped secondary schools and many sports clubs with defibrillators in 2012.

‘It’s a huge commitment for Craig’s Heartstrong Foundation to raise such a large sum of money to kit out our primaries with defibrillators and we in education want to help the fund-raising, so we have made it our first ever charity of the year at our headquarters, Hamilton House. I am a keen walker and Danita has always wanted to tackle this fantastic community event so, with the help of family, friends and colleagues’ sponsorship, we hope to significantly add to the sum we hand over to the charity at the end of the year.’

Craig’s Heartstrong Foundation is named after talented local footballer Craig Lunt, who died of an undiagnosed heart defect in 2005.

‘£60,000 seems like a high target but we have already reached £10,000 and have many events on the horizon. We would like to wish good luck to everyone who is supporting us in the Parish Walk and any other events and hope that the Isle of Man fundraising spirit helps the Minister and Danita over the line, helping us to hit our targets too.’ 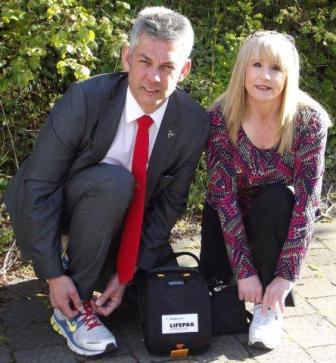