Ballacottier Primary pupils concerned about their safety while walking to and from school campaigned for a crossing on Stevenson’s Way, writing to David Cretney MHK, Minister for Infrastructure. A new crossing has been created.

Pupils are involved with Braddan Commissioners’ scheme to revamp a playground near the school. They spoke to the board about the type of equipment they wanted to see installed and are starting to see their ideas coming to fruition.

Helping pets is also a priority for pupils. They persuaded teachers to run an art competition to celebrate World Animal Day. The entry fee was a tin or packet of pet food and pupils amassed three large hampers that were donated to a grateful MSPCA. The charity displayed winning artwork at its sanctuary, Ard Jerkyll.

Ballacottier, which has 260 pupils, is the fourth school to secure the Investing in Children benchmark since two local evaluators, Nigel Bennett (St John’s Primary) and Annette Baker (Ballakermeen High), were appointed last spring. Previously, only their schools held the accolade.

Schools seeking accreditation must prove they not only listen to, but act on, pupils’ initiatives. Mrs Baker interviewed children independently of teachers to check their views have made a genuine difference to school life.

An 18-strong school council is behind the initiatives that saw Ballacottier secure the award. Comprising children elected from each class, it has its own budget and its own motto – ‘working hard to help everyone in our school’. Pupils note ideas in class books and a suggestion box is well used, too.

The children organise their own lunchtime clubs. The origami club ran out of paper so pupils wrote to businesses to see if they could have their scrap paper, with a kind donation allowing the club to continue.

In October, pupils organised the school’s Hallowe’en ‘Scaresco’ (instead of disco) where the chance to throw soggy sponges at teachers proved particularly popular. This raised money for children to use for prizes for competitions they organise and for a school team points cup, awarded each term.

Purchasing equipment to make outdoors and wet playtimes more fun was another initiative by School Council, as was improving seating arrangements at lunchtimes. Ballacottier joins Dhoon, Arbory and Fairfield schools in being awarded Investing in Children status. 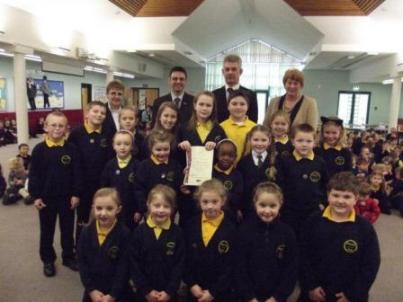