'Although the snow was, thankfully, not as severe as predicted, high ground and the west of the Island was hit with significant amounts. Many of our staff, together with the emergency services, worked in poor conditions to get the Island’s roads back in operation and help keep the public safe. Ellerslie Control was brought into operation to coordinate our response and teams have been on duty round the clock since Thursday night.

'I would like to pay tribute to all of the men and women who have worked on behalf of the public over the last few days. We are proud of them all. I would also like to mention the inter department planning and coordination that goes on throughout the year. This close working relationship, between the departments of Infrastructure, Education and Children, Bus Vannin, the Police, the Fire and Rescue Service and Civil Defence has seen our response to extreme weather events improve year after year.' 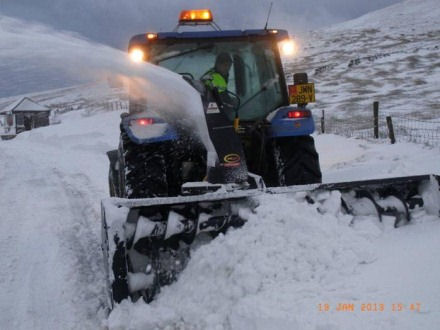 The Department’s workforce have been clearing drifts of snow up to 4 feet deep using snow ploughs and gritting machines. This has also been the first opportunity for the Department to use a small demountable snow blower which is carried on a tractor. The snow blower unit was bought in response to concerns raised by Ramsey Town Commissioners and the Ramsey Chamber of Commerce, that the Mountain Road was closed too often and affecting the town’s businesses. The Department did not feel that the purchase of a full scale snow blower was justified for the Island, but identified this small demountable unit as a value for money solution to strengthen our capability.

'Rather than using snow blades to try and progressively push the snow to the side of the road, the snow blower was able to go through drifts up to 4 feet deep, throwing the snow clear of the road without damaging fencing. We have mounted the unit onto a tractor that we use during the summer to cut hedges, and although it is early days I could not be more pleased with its performance.'