The Island’s Director of Education, Martin Barrow, is to retire at Easter 2014.

After training as a teacher in London, Martin began his career at Albert Road Junior School in Ramsey. Here he became involved in Manx culture and trained children in Manx dancing and music in his spare time.

Together with colleagues, he pioneered the use of computers to support learning and in 1985 he was seconded to the then Board of Education to establish their use across primary schools.

‘I will always look back at my time as head of Andreas with affection and pride. It was a privilege to work with all members of the school community but especially the children and a particular highlight was the centenary celebrations, which involved the whole Andreas community and led us to develop new approaches to how the children were learning.’

In 2004 Martin was seconded from his headship for two days a week to establish a training programme for primary school leaders and, in 2005, an opportunity arose for him to join the Department’s Education Improvement Service as an adviser and he left his headship post.

In 2007, Martin became responsible for primary education when he was appointed Coordinating Adviser for 3-11 Education and two years later he became head of the Education Improvement Service as Senior Adviser.

Following the appointment of the Department’s first CEO in January 2011, and the subsequent reorganisation of its management structure, Martin became Director of Education.

Commenting on his retirement, Martin said:

‘I have had a long and rewarding career in education on the Island and in the last few years have relished the challenge of helping to provide the Department with strategic leadership, albeit at a time of significant financial constraint.’

Martin is married to Jacqueline, Headteacher at Bunscoill Rhumsaa, and they have two grown-up sons, one of whom has followed his parents into education and teaches in Leicestershire while the other works in commercial finance in London.

He is looking forward to having more time to engage in activities such as travelling, cycling and walking as well as to work on restoring his classic MG Midget sports car.

Professor Ronald Barr, CEO of the Department of Education and Children, said Martin’s depth of knowledge across the spectrum of education would be greatly missed.

‘Martin has done much to improve the quality and delivery of Education on the Island. His professionalism, dedication and detailed professional knowledge will be much missed by colleagues both in the Department and in schools. He has been an invaluable member of the senior management team in education and has done much to support many colleagues during his time at DEC. On behalf of the whole education service, I want to thank him for all that he has done and wish him a happy retirement.’ 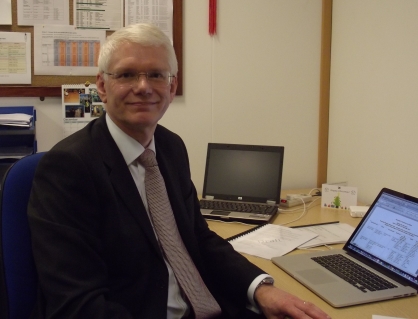