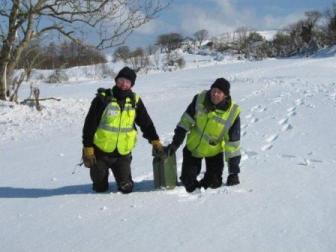 Volunteers were out in numbers during the Arctic blizzards and gale force winds at the end of March, working alongside other emergency services to help people trapped inside their homes by deep snowdrifts. They assisted householders left without power, cleared snow from paths and access routes, delivered fuel, food, prescribed medication and other essential supplies, co-ordinated the invaluable support provided by the Isle of Man Four Wheel Drive Club, dug out livestock, and also made a significant contribution to the helicopter evacuation of a vulnerable person from Cronk-y-Voddy.

The intensive efforts during the snowstorms added to the 4,200 hours already completed by Civil Defence personnel over the past 12 months responding to call-outs and attending training sessions.

Home Affairs Minister Juan Watterson MHK has paid tribute to the commitment and dedication of the team which continues to provide support in a wide range of emergency situations. He said:

‘These volunteers devote many hours of their own time to helping the local community, often working in extremely challenging circumstances. The role of the Civil Defence Corps was brought into sharp focus during the recent severe weather. Volunteers responded in a swift and effective manner, working with agencies such as the Isle of Man Constabulary, Fire and Rescue Service, and Ambulance to help restore normality to affected households. The primary focus of the Department of Home Affairs is to maintain community safety and to look after vulnerable people in their time of need. Civil Defence volunteers are an important part of the resilience that allows us to prepare for and respond to emergencies, whatever the scale. Their support is extremely valuable during multi-agency incidents and provides added reassurance to the local community.’

The heaviest snow to hit the Isle of Man since 1963 added to a particularly eventful 12 months for the Civil Defence Corps which has also responded to numerous incidents of flooding, assisted searches for vulnerable missing persons, and contributed to the smooth running of major community events. Extreme weather has been a persistent feature of the past year and volunteers have been called out to help the emergency services minimise the damage caused to homes and businesses by heavy rainfall.

More than 400 man-hours were recorded over a two-day period searching the Manx hills and countryside during a missing persons case, while the Civil Defence Corps also provided support for the Olympic Torch Relay and Queen’s Jubilee celebrations as well as logistics and first-aid for regular events such as the Parish Walk, Manx Mountain Marathon and Royal Manx Agricultural Show. In addition to tackling a variety of operational incidents, volunteers have delivered presentations to Island high schools and youth organisations, and enhanced their skills by attending a series of training sessions.

‘Civil Defence is a special organisation: like an insurance policy, you hope you’ll never need them, but if things go wrong you know they’ll be there to help. The commitment shown by all our volunteers is further testament to the Isle of Man’s outstanding community spirit.’