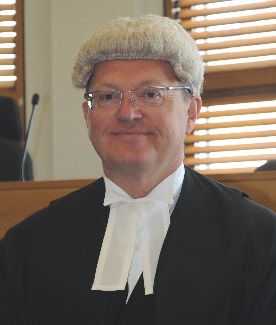 His Honour Deemster Andrew Corlett has been appointed as Her Majesty’s First Deemster and Clerk of the Rolls in the Isle of Man.

Deemster Corlett has served as the Island’s Second Deemster since 2011, having been appointed to the office of Deputy Deemster in 2007 and to that of Deemster in 2009. Prior to this he was Government Advocate in the Attorney General’s Chambers and had worked for 17 years in private practice.

He will succeed Deemster David Doyle who steps down as First Deemster and Clerk of the Rolls at the end of this month after eight years in the post.

Deemster Corlett has been appointed by Her Majesty The Queen, based on a recommendation made by a local selection panel, following an open recruitment process.

The Isle of Man prides itself on its values of democracy, good government and the importance of the rule of law. The judiciary is a key component in delivering these values and in maintaining the Island’s international reputation.

Deemster Corlett brings a wealth of experience to the post of First Deemster and Clerk of the Rolls having demonstrated a strong track record of professional achievement.

Manx born and bred, he is a graduate of Pembroke College, Oxford and was called to the Manx and English Bars in 1984. He has worked as an advocate in private and government practice across many disciplines, including civil and commercial litigation, human rights, employment law, estate and trust disputes and insolvency.

As Second Deemster he has served in the Appeal Division and presided over numerous complex cases. Deemster Corlett will be known to many in the Island as the judge in overall charge of the Family Court.

‘I am delighted that Her Majesty The Queen has approved my appointment. It is an honour and privilege to be appointed as First Deemster and Clerk of the Rolls and to be given this unique opportunity to serve the Crown and the Isle of Man. This is a challenging role, particularly at a time when the administration of justice faces considerable change. It is one I am very much looking forward to.’

‘I welcome The Queen’s appointment of Deemster Corlett as First Deemster, to succeed His Honour David Doyle who has done so much for the Isle of Man in that role. Deemster Corlett is a well-known and well-respected figure.’

The official swearing in of Deemster Corlett will now be arranged.