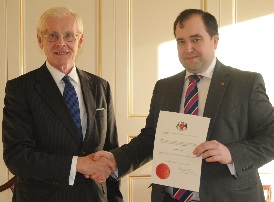 Mr Ashford, who was elected as MHK for Douglas North in 2016, succeeds Kate Beecroft MHK who resigned from the post last week.

He will take over responsibility for the Department with immediate effect having been presented with his Ministerial Warrant of Appointment by His Excellency Lieutenant Governor Sir Richard Gozney.

Mr Ashford has built up a broad experience within the Isle of Man Government over the past 15 months after serving as the Member for the Cabinet Office.

He has led the Digital Strategy and the Office of Cyber Security, served as vice-chair of the Public Services Commission and as the employer representative on the Public Sector Pensions Authority. Mr Ashford has also played a prominent role as a member of the SAVE initiative and headed committees investigating gas pricing and telecoms services.

‘After accepting Mrs Beecroft’s resignation last week I was determined to act swiftly to appoint a replacement to provide stability and leadership within the Department. I am delighted that Mr Ashford has taken up my offer to become the next Minister for Health and Social Care. The Department is facing some major challenges and I am confident that he will work as part of the Council of Ministers to put the Island’s health and social care services on a sustainable footing for future generations.’

‘I have decided to keep the Council of Ministers in their current posts and appoint from the backbenches where I feel we have a great depth of talent. Mr Ashford has been promoted on merit. He has demonstrated during his time in the Cabinet Office that he is a very capable, dedicated and hard-working Member with a proven track record of delivery.’

Mr Ashford, who has also served on the Social Affairs Policy Review Committee, commented: ‘It is an honour to be appointed as the Minister for a Department that plays such an important role in all our lives. I look forward to meeting the staff and gaining a deeper understanding of the Department’s services. I am aware of the huge challenges that lie ahead and I am focused on making a positive difference.’

‘I will work to set out a clear direction for the future, building on the foundations of the existing five-year strategy. The funding of health and social care services is a massive issue for countries around the world and I will work with my ministerial colleagues to serve the best interests of the people of the Isle of Man.’