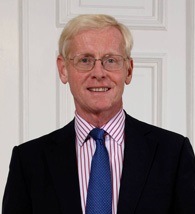 The Isle of Man Government is pleased to announce the appointment of Sir Richard Gozney as the next Lieutenant Governor of the Island.

Sir Richard, who will succeed Adam Wood when his term of office concludes in April next year, has recently retired as a non-executive director after a distinguished career in the British Diplomatic Service. This culminated, between 2007 and 2012, in the post of Governor and Commander-in-Chief of Bermuda.

From 2000 to 2007 he was British Ambassador to Indonesia and then British High Commissioner to Nigeria.

Sir Richard, who was educated at Oxford and is married with two sons, has also worked in Argentina, Spain and Swaziland and as Private Secretary to three British Foreign and Commonwealth Secretaries.

‘I am privileged to have been chosen as the Isle of Man's new Lieutenant Governor. I fell for your Island when I visited a few years ago, and my wife, Diana, and I are both hugely looking forward to moving to the Isle of Man and to meeting the people of the Island over the following months.’

The Lieutenant Governor is appointed by Her Majesty The Queen as the representative of the Crown in the Isle of Man.