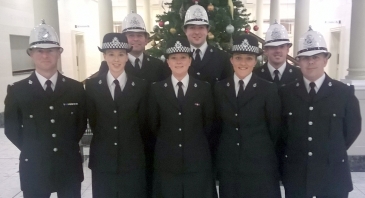 Eight new police officers are on the beat in the Isle of Man, strengthening efforts to maintain community safety.

The latest recruits started work as uniformed constables in January after a rigorous selection process and 15-week initial training programme. They are currently deployed in the Island’s Neighbourhood Policing Teams under the supervision of an experienced officer.

They will serve as probationary constables for two years, performing a wide range of duties including investigating crime, arresting and interviewing suspects, taking witness statements, dealing with traffic issues and responding to the needs of the public.

A fresh campaign will be launched in March to attract additional applicants interested in a challenging and rewarding career in the Isle of Man Constabulary.

There continues to be a strong focus on recruitment as part of carefully managed succession planning within the Manx force. Regular intakes of student officers are needed to join the organisation to maintain policing numbers when long-serving officers retire.

‘I had the pleasure of attending the graduation ceremony for the new constables and I wish them well as they begin their careers. These young officers have demonstrated the qualities needed to serve their local communities. The Isle of Man Constabulary continues to provide a high level of public service and this can only be achieved through recruiting people who possess strong values and the right mix of skills. This process is part of our efforts to build the Constabulary to its establishment figure of 211 officers.’

‘Recent events have brought the funding and staffing of the Constabulary into sharp focus, but it would be wrong to speculate on any links between crime rates and police numbers. The Chief Constable has been bold and innovative in his response to increased financial pressures and the Isle of Man remains one of the safest places to live in the British Isles. However, I have made it clear on many occasions that the police budget cannot be reduced any further without compromising public safety.’

The training of new police recruits has taken place in the Isle of Man since 2007. Prior to that student officers undertook their basic training at academies in the UK.

People who apply to join the Isle of Man Constabulary must pass an initial paper sift before undergoing a fitness test, classroom assessment and training sessions at Ardwhallan outdoor education centre. Applicants are assessed in line with the Constabulary’s core values of Caring, Professionalism, Challenge, Service, Respect and Responsibility.

Successful candidates progress to the full training programme to learn about the law and various aspects of modern policing.

The emphasis has been on recruiting local people to serve their local communities, although a small number of officers have transferred to the Island from UK forces in order to meet demand. The Constabulary also takes on Special Constables and volunteer staff who can use their skills to make a valuable contribution to the Island’s quality of life.

‘The Isle of Man Constabulary offers an interesting and worthwhile career and requires men and women who are prepared to work hard to serve the community. Police work is unique. When officers are out on patrol they never know what situation they may be called upon to resolve. It involves dealing with people from all walks of life in many different circumstances. All of this requires a range of personal skills such as patience, courage, flexibility, understanding and the ability to think and act quickly.’

Anyone interested in a career in the Isle of Man Constabulary can contact Organisational Development at Police Headquarters, telephone 631546 or follow the Police Facebook page or Twitter feed for updates about recruitment. Informal drop-in sessions will also be held at venues around the Island during the next recruitment period in March.