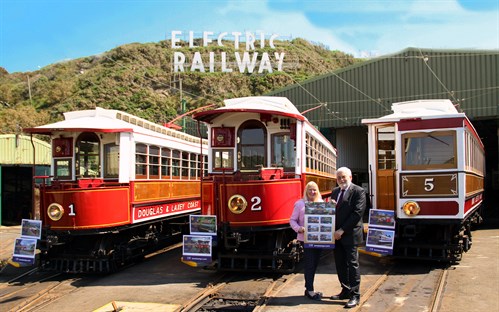 In celebration of the Manx Electric Railway’s 125th Anniversary this September, Isle of Man Transport has teamed up with Isle of Man Post Office to commission a set of six stamps featuring photographs from competition winners, which will be issued on Saturday 30 June 2018.

In August 2017, a competition was launched to find extraordinary images from Manx Electric Railway enthusiasts to help support the 125th Anniversary of the heritage service.

Isle of Man Post office staff were overwhelmed by the quality of entries and four winners will have their photographs appear on the stamp collection. Runners-up photographs will be used on additional products that complete the collection, including a presentation pack, prestige booklet, decorative sheet and First Day Cover.

‘It’s a great honour to be part of such a celebration and fantastic to see my image of this iconic Railway on a stamp. I am looking forward to becoming further involved in the Manx Electric Railway’s anniversary events’.

This stamp collection forms part of the celebrations of the landmark anniversary, which includes a festival organised by the Department of Transport from 1 – 8 September 2018.

‘We are incredibly proud that the Isle of Man is home to rolling stock that features in the Guinness Book of Records for having the oldest trams in the world still operating on its original system. It’s great to see everyone embracing the anniversary and September promises to be a fantastic week of celebrations - I hope Island residents as well as tourists will enjoy the festival.’

‘We have partnered with Isle of Man Transport on a number of their significant anniversaries, but the fact that these stamps feature images from Manx Electric Railway enthusiasts makes these very special. We are also particularly pleased that over the coming months these stamps will also be dispensed from our kiosks and counter network, replacing the current triskelion design’.

Keep up to date on all Manx Electric Railways celebrations and tickets by visiting www.rail.im or Isle of Man Transport Facebook and Twitter pages.

The stamp collection is available to pre-order now from www.iompost.com/MER125.