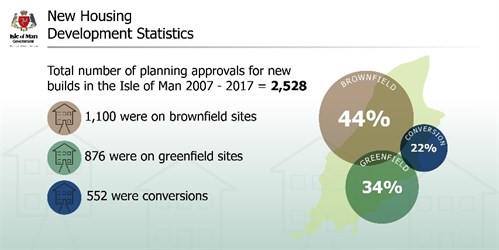 The development of brownfield sites and conversions of existing buildings accounted for two-thirds of all planning approvals for new housing in the Isle of Man during the 10-year period from 2007 to 2017.

Regional breakdowns for the North, East, South and West are also provided in the report, which has been produced as part of evidence for the Draft Area Plan for East and submitted to the Tynwald Select Committee on the development of unoccupied urban sites.

‘People may be surprised by the figures, as there is a perception that most new houses are built on greenfield sites. The evidence demonstrates otherwise, especially in the east and north. Brownfield redevelopment is targeted and is taking place, but additional zoning of greenfield sites will be needed in the years ahead.’

Feedback to a recent planning consultation showed a clear desire among the public for action to be taken on sites that detract from the appearance and viability of town centres.

The existing policy of the Council of Ministers is that planning approval should not normally be given for cleared sites to be used as temporary car parks. This is aimed at supporting redevelopment to boost the economy.

Subject to the approval of Tynwald, steps can also be taken to compulsory purchase land if it is considered to be in the national interest and a deal cannot be negotiated with the owner.

The Draft Area Plan for the East identifies a number of comprehensive treatment areas where compulsory purchase may be one of several options to facilitate improvement or redevelopment. Provision for such areas is set out under Section 4 of the Town and Country Planning Act 1999.

‘Planning is an important piece in the jigsaw to promote the Isle of Man as a special place to live and work. Bringing brownfield sites back into more socially and economically productive use has to be a good thing for everyone and for the place itself. If redevelopment is not going to take place immediately then useful open space can be created temporarily, as shown by the former Farmers Arms site in St John’s, which has been transformed into the 2018 Year of Our Island garden.’