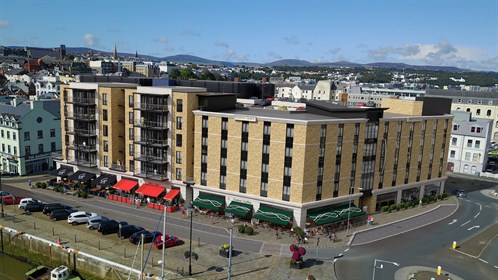 A £25 million 80-bed hotel and seven-screen cinema complex will be built on the former Lord Street bus station site in Douglas, subject to planning approval.

Construction is scheduled to begin early in 2019 and will take two years to complete.

The announcement of the proposed development has been welcomed by Chief Minister Howard Quayle MHK, who has referred to the town centre project as a major step forward in the continued regeneration of Douglas.

‘Quayside North will be a great asset to Douglas town centre, offering diversity in terms of entertainment and accommodation as well as creating up to 100 jobs.

‘This is an exciting project which has been in the pipeline for some time and is a significant scheme in our Central Douglas Masterplan.

‘There is still work to be done to finalise exact details but, with the promenade regeneration also set to get under way in September, I am pleased today to ask people to look forward to an exciting future in the life of the Island’s capital.’

In addition to the hotel and cinema, the complex will also serve transport needs. Modern bus shelters will be installed along Lord Street to provide a transport hub similar to the one serving Liverpool One shopping centre. A tourist information centre is incorporated into the design along with facilities for the public.

‘I am delighted that this key development site is now coming to fruition and that the proposed investment shows confidence in the Isle of Man.

‘Planning approval is yet to be sought for the Quayside North project – it’s therefore premature to offer any great detail at this stage.’

An environmental impact assessment is to be undertaken as part of the planning application over the coming months with planning support and submission handled by planning consultants Peter Brett Associates on behalf of developers Kane Limited.

‘My team has been working hard during the past 18 months to bring together an exciting mixed-use scheme that is both viable and deliverable in the current climate.

‘We are excited by the strong brand names that have been attracted to the scheme and look forward to exchanging agreements to lease with both Omniplex cinemas and Travelodge, subject to board approval. The proposed Travelodge hotel will include 20 bedrooms that will adopt their new super rooms concept, which includes additional comforts designed with business travellers in mind.

‘The images currently in circulation illustrate the building as a concept only – the design detail will be developed through consultation with the planning office.’

A statement from Omniplex said:

‘The Quayside North project is an exciting venture for Omniplex Cinemas and we look forward to providing a world-class cinema experience to Manx audiences in the not too distant future. We will, of course, be showing the newest blockbuster releases and introducing the latest cinema technology to the Island, including our OmniplexMAXX giant screen format with Dolby Atmos sound and laser projection, while also providing luxury seating to include fully electric reclining seats.’

‘The Borough Council is very pleased that the scheme is going ahead and hope that it will lead to further development in the Lower Douglas area.’

The project fulfils a policy within the Programme for Government to consider the social and economic benefits alongside financial considerations when disposing of Government property.