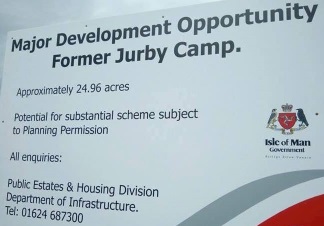 The Department of Infrastructure is promoting a major development opportunity in the north of the Island.

The Department’s Public Estates and Housing Division is currently seeking to establish if there is any interest in developing the former RAF camp at Jurby.

The 24.96-acre site has the potential to accommodate substantial development schemes, subject to planning approval. The land previously housed a number of RAF operational and ancillary buildings.

The Department is keen to adopt a flexible approach and the opportunity will not be limited to larger developers who may be interested in the whole site. Consideration will be given to a wide range of proposals, including smaller construction projects, affordable housing and self-build plots.

As part of the initial process, Jurby residents, community groups and tenants on the neighbouring industrial estate will be asked for their views about possible future uses for the site.

‘At this early stage we are simply testing the water to see if there is any interest in the site. The Department will assess any responses before deciding whether to invite formal expressions of interest.’

‘While any proposed new schemes would need planning permission, we believe that development of the RAF site could be a catalyst for the further regeneration of Jurby, as well as supporting the wider Island economy. The Department is open to a range of potential options and would encourage interested parties and developers of all sizes to come forward with proposals.

‘Community engagement is important to the Department and we will invite feedback from people who live and work in the area about the type of development and facilities they think would enhance the area.’